Kidnap Mowgli for their leader (formerly).

Treacherous Animals
The Bandar Log are supporting antagonists from Disney's 19th full-length animated feature film The Jungle Book. They are a mischievous clan of monkeys that serve King Louie.

Individual members were voiced by Pete Henderson, the late Bill Skiles, and the late Hal Smith.

The Bandar Log were led by King Louie, committing mischief all over the jungle. When King Louie learned of Mowgli, a human living in the jungle, he saw the boy as a means to obtain man's "Red Flower", or fire, to grow more powerful. He tasked the Bandar Log with kidnapping Mowgli.

The monkeys find Mowgli with the bear Baloo, and kidnap the boy. They proceed to taunt Baloo and attack him by throwing fruit at him and soon tripping him off of a shallow cliff. The monkeys take Mowgli to King Louie, who attempts to bargain with the boy for the use of his fire. Louie sings the song "I Wanna Be Like You", and the other monkeys join in with the singing and dancing. When Baloo and the panther Bageerha arrive to rescue Mowgli, the Bandar Log attacks them and tries to steal the boy back. The fight ends when the temple ruins collapse, and Baloo and Bageerha escape with Mowgli.

Much later, Mowgli returns to the jungle after spending time in the Man Village. Baloo brings him to the ruins, where Baloo reveals that the Bandar Log have reformed and have turned the place into a club.

In the spinoff series TaleSpin, the monkeys serve as employees of a nightclub called Louie's Place, run by Louie himself.

In the 1994 live-action remake, the Bandar Log rule a temple under King Louie, who summons the snake named Kaa to kill intruders trying to steal the temple's treasure. 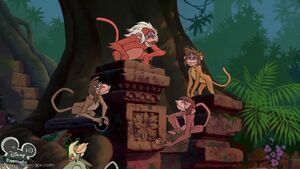 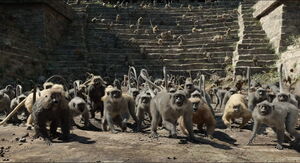