Member of the Ghouls (when under mind control)

"Bandit" Keith Howard is a minor antagonist in Yu-Gi-Oh!. He is the former American Champion. He is a cheating and aggressive duelist who plays a Machine-themed deck.

He was voiced by Hajime Komada in Japanese and Ted Lewis in English.

Keith used any opportunity to cheat, most notably by pulling cards underneath his wristbands and used a mechanical arm while he was brainwashed by Marik Ishtar. He shows no remorse in getting what he wants most notably winning and money. His grudge against Pegasus since he was humiliated and defeated by him when he chose a boy named Tom (Sam in the 4Kids dub) to defeat Keith.

Bandit Keith was the American Duel Monsters champion; until he lost a Duel against the game's creator, Pegasus J. Crawford; using his Millenium Eye to read Keith's mind, Pegasus called a young boy from the tournament to take his place inb the Duel, giving him a written set of instructions to follow. Using the instructions provided to him, the boy defeated Keith in a single turn, humiliating the professional Duelist. Keith has since been seeking revenge on Pegasus and regain his former title as champion. He and his henchmen, Ghost Kotsuzuka, Satake and Takaido entered Pegasus' tournament Duelist Kingdom, and took Joey Wheeler into a duel arena in a cave, where Bonz dueled Joey while Keith was giving him instructions. Joey won, so Keith beat up Bonz, Sid and Zygor, stealing their Star Chips so that he had ten and could enter Pegasus' castle for the finals.

In the semifinals, Keith dueled Joey, whom he picked on almost as bad as Seto Kaiba did, but he did not have either of the two entry cards, so he stole Joey’s card. He was shocked when Joey turned up with a card (given to him by Mai Valentine who had lost the previous duel to Yugi), and cheated during his duel with Joey by keeping two 7 Completed cards used to power up his Slot Machine beneath his wristband, but in spite of this, Joey won. He tried to disqualify Joey by saying that the entry card he used was not his, but his knowledge of this revealed that he stole Joey’s card, with Pegasus also pointing out his cheating in the duel, and ordered Keith taken away. Keith broke free, drew a pistol (removed in the 4Kids dub), and demanded that Pegasus give him the tournament prize money. Pegasus was not fazed and hit a switch that opened a trap door, ejecting Keith from the island and sending him plummeting into the ocean.

In the original manga, Keith instead threatens Peagsus with a knife, only for Pegasus to use the Millenium Eye to inflict a Penalty Game on him, transforming Keith's hand into a gun and forcing him to shoot himself with it in the style of Russian Roulette, killing him.

Bandit Keith was later found by Marik Ishtar and his Ghouls (Rare Hunters in the 4Kids dub), and Marik controlled him using his Millennium Rod. While posing as a fortuneteller, the possessed Keith took Yugi's Millennium Puzzle and dueled Yugi over it. He was released from Marik's control by Yami Bakura, and as Marik attempted to regain control, Keith attempted to fight him off, causing a fire in the warehouse in which they were dueling. Keith escaped the fire when Joey and Tristan opened the doors (and were disgusted to find out that they rescued Bandit Keith).

Keith was never seen following his time as Marik's mind slave, except as a lost soul in Season 4, Waking the Dragons, as a lost soul alongside those of PaniK, Seeker, the Paradox Brothers, Arkana, and Yami Marik, however, as most of them (aside from PaniK, Seeker, and Yami Marik) were neither dead, in the Shadow Realm, nor taken by the Orichalcos, it is likely that this was just an illusion. It is possible, however, Keith was sent to the Shadow Realm by Marik after he had failed him.

Bandit Keith appeared as a minor villain in Yu-Gi-Oh! Falsebound Kingdom. He appears only in the Kaiba Campaign and you must battle him twice. Kaiba and Mokuba fight him first in the second level "Bandits". He appears along with Bonz who are wanted for robbery by the Emperor. Once they are defeated, Keith escapes and Bonz is left for dead but Mokuba lets him live and he becomes a permanent member of Kaiba's group for the remainder of the game.

Later, when Scott Irvine captures Mokuba, Kaiba did not know who took him and learned that Bandit Keith held onto him for awhile. You fight him again in "Bandits, Again" but he has three of Scott's soldiers with him. Once they are all defeated, Keith tells Kaiba that he gave Mokuba to Scott. It is unknown if this was the real Keith or a hologram created for the game. Since his deck consisted of machine monsters in the anime, he used machines in the game. The first match, he used Machine Sergeant, Commander and Cannon Dharma. The second time he uses Revolver Dragon, Slot Machine AM-7 and TM-1 Launcher Spider, which all three will join Kaiba's deck when Keith is defeated.

As a professional duelist, Keith possesses several decks, though his main deck consists of various machine type monsters, mostly with the DARK attribute. His signature monsters include Barrell Dragon, Launcher Spider and Slot Machine. His signature trap is his Time Machine, and his signature spell is Pillager. He also owns three 7 Completed spell cards, two of which he hides in his wristband, which he uses to power up his Slot Machine. Due to the Dueling Arenas placing Duelists a good distance away from each other, Keith's opponents are unable to see him removing his cards from his wristband and rarely ever realize that he is cheating, save for Pegasus, who is able to easily see through Keith's deceptions with the power of his Millenium Eye.

While controlled by Marik, Keith's deck is augmented by rare cards aquired by the Ghouls, including the legendary ritual monster Zera the Mant. Similar to hiding cards in his wristband, a claw menchanism feeds cards directly to his hand. 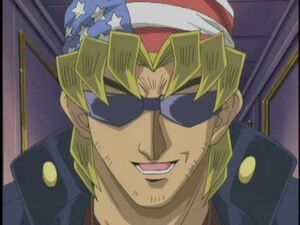 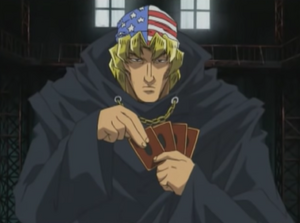 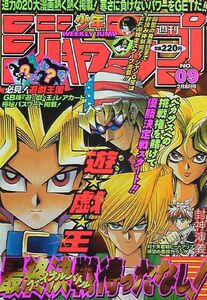