To go to war with the Candy Kingdom (currently)

Royal Thief
Bandit Princess is a minor villain in the cartoon TV series Adventure Time. She is one of many princesses in Ooo, but unlike the others she is a greedy thief with no kingdom.

She is voiced by Amy Sedaris.

She first appeared in "I Am Sword", where she steals Finn's Finn sword after Finn drops it in a trench. She then goes around Ooo robbing people with the sword. Finn could see her through the Finn sword in his dreams. The Finn in the Finn sword was trying to reason with Bandit Princess to give the sword back, but she wouldn't listen. She robs the Spiky Village then heads over to rob the Box Kingdom. Finn and Jake then arrive to confront her and get back the Finn sword. Suddenly, Finn's grass sword grows back and the two start fighting. During the battle the grass sword breaks the crystal within the Finn sword and Bandit Princess escapes.

She then returns in "Gumbaldia" as one of the many villains forming Uncle Gumbald's legion of Candy Kingdom haters who prepare to go to war with the Candy Kingdom.

In "Come Along With Me" she witnesses GOLB's arrival then runs away with the rest of Gumbald's army after Aunt Lolly asks them to help fight GOLB. 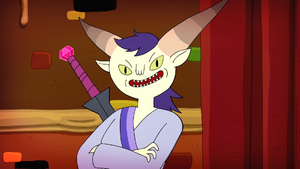 Retrieved from "https://villains.fandom.com/wiki/Bandit_Princess?oldid=3533274"
Community content is available under CC-BY-SA unless otherwise noted.