Whining about not being able to shoot people.
Backhanding people who get too close to him.
Cleaning the beach.

Bandō (in Japanese: 坂東) is one of the recurring antagonists turned anti-hero of the manga and anime series, Elfen Lied.

He is voiced by Sentai and Seiyuu veteran actor Jouji Nakata (Japanese), and Jason Douglas (English).

He is an operative in his mid-30's for the National Police Agency's Special Assault Team (SAT). Though he is fully human, he is as homicidal and apathetic to other people as the worst of the Diclonii. He is a hardy and effective soldier, even though he often disobeys orders so that he can indulge his need for violence. He was prone to strike staff members at SAT and even threaten other members of his team.

After Lucy escapes, Bando is one of the SAT members sent to capture her. Initially, Bando only encounters the Nyu personality, but soon provokes Lucy's personality into attacking. After his young mission partner is killed, Bando initially welcomes the challenge, but quickly discovers that his MP5's 9mm bullets are almost effortlessly deflected by Lucy's vectors. Forced to dodge numerous heavy objects that Lucy throws at him, Bando is placed on the defensive. Ultimately, Lucy overpowers Bando and then takes great pleasure as she maims him, severing his right arm at the elbow, and breaking his left forearm so severely that his left hand is left dangling uselessly. Bando screams in pain, promising that he will never forget Lucy's face; Lucy responds by using her vectors to destroy his eyes, blinding him. Deciding that torturing Bando is no longer fun, Lucy decides to kill him, but her Nyu personality suddenly emerges, and she runs away. Bando, blind and bleedling profusely, is left lying on the ground, cursing and thrashing around in pain. Alerted by the noise, Mayu (who was taking shelter nearby) finds Bando and applies an improvised tourniquet on his arm stump before calling an ambulance, thus saving his life. It is worth noting that, in all his efforts to get revenge on Lucy, the life of his young partner is never once raised as a reason for this. Bando's self-absorption at this time was staggering.

Back at the Diclonius research facility, Bando, who is seen heavily bandaged, screams and curses as Kurama tells him that he must undergo castration surgery, since he has now been infected with the vector virus (and thus any children he fathers will be born as diclonii). Kurama explains to Bando the truth about the diclonii and their invisible vectors (hands) and their true purpose, to destroy the human race. Later, Bando encounters Lucy as Nyu at the nearby college, while he waits to meet with Doctor Yu Kakuzawa, who makes him an offer to avoid castration and become father to Diclonius children. As Lucy herself would later, Bando rejects the offer from the sleazy scientist.

After his initial recovery, Bando is outfitted with biomechanical implants, including bionic eyes and a highly advanced Myoelectric prosthetic hand, but escapes (by punching out the doctor and jumping through a window) before the castration operation can be performed. Seeking revenge against Lucy, he acquires two or more Desert Eagle handguns. In the manga he gets other weapons such as an RPG. The guns fire custom .50 Action Express rounds which are so heavy abd powerful, vectors are ineffective; at close range, not even Lucy can stop them. Feeling that Lucy will eventually return to the same stretch of beach that saw his defeat, Bando waits and cleans the beach of litter, seemingly simply so he has something to do. After a battle with the far gentler Diclonius, Nana, Bando agreed to join her in seeking Lucy out, though Nana quickly decided against keeping to this for personal reasons.

In dealing with the persistent Mayu, he is shown to have a more compassionate side, though he is quick to hide this with bluster. At some unknown point, it seems Kurama himself recruits Bando into an organization the Japanese government undertook in order to oppose the Kakuzawas and their agenda. In any event it seems to be a loose alliance, with Lucy still as his target and quest. He aided Kurama during the confrontation with his daughter Mariko, and stopped the man from killing himself while grieving for her when she was gone. Mayu, who had developed a sisterly relationship with Nana, never realized that Nana's adopted 'Papa' Kurama was nearby when she would visit Bando with food at the beach.

When she and Nana came under assault at Maple House by the pedophile and assassin called the "Unknown Man", Mayu called Bando, who gave the coward the beating of his miserable life, even overcoming his specialized crossbow bolts, spiked iron balls laced with neurotoxins. But when Mayu's guardians, college students Kouta and Yuka, returned from school, with them was the girl they called Nyu. Nyu was in fact Lucy's other personality, and being shot by Bando awoke her once more. She acceded to his demand for a battle down by the beach and left her friends. Bando for his part was furious with Mayu, who had evaded his questions about knowing a horned girl who could have been Lucy lived with them. Nana left to aid him against Lucy despite her wounds from Unknown Man, and Mayu followed to apologize and explain herself. Bando showed one of his infrequent moments of compassion when he paused to bury a young Diclonius badly abused by Unknown Man and used by him as a living tracker for Lucy.

On the beachfront, Bando showed his cunning when Lucy realized she was facing him on a field cleared of any debris she could use as a weapon, and replete with booby traps meant to blind and confuse Lucy. By a combination of battle training and analyzing his fights with Lucy and Nana, he was able to dodge her otherwise invisible vectors by sensing the vibrations in the air. But when it seemed he at last had the better of his unstoppable opponent, the Unknown Man resurfaced, shifting from being a psychotic menace to being almost a pathetic fanboy for Lucy, which prompted her to cut his head off and throw it at Bando. Bando for his part continued to play it smart, using the dead coward's crossbow to injure Lucy further, though not quite enough. Another more gentle interloper came in the form of Mayu, who suddenly recalled seeing Lucy's original battle with Nana, in which Nana was maimed. Now seeing her friend as a threat to her relationship with Kouta (who had suppressed memories of his own Mayu might now awaken), Lucy regretfully moved to kill Mayu, but at the last moment, Bando took the blow instead, being cut in half at the torso just as he also shot off one of Lucy's horns, again forcing the Nyu personality to take over and flee in confusion.

While dying in Mayu's arms, Bandō reflected that he had always wanted someone to cry for him after he died, since he had isolated himself from human contact for all his life; despite stil being confused as to why he would do such a thing for anyone, he now felt at peace, especially when Mayu lied and told him he had successfully killed Lucy. The next morning, the bodies of both Bando and Unknown Man are gone, possibly cleared away by the Japanese government. Kurama may have played a role in this, though at this point, his mind was still largely gone.

In the final chapter, Mayu is seen cleaning the beach where Bandō had come to live in his memory. To her astonishment and joy, Bando returns, and she embraces him. It is shown that the entire lower half of his body has been replaced with bionics. It is completely unknown what path their future relationship, if any, took.

In the anime, Bando does not receive the character development he does in the manga, and his original confrontation with Mayu after his bionic surgery is his sole interaction with her. An extra episode (OVA) shows that his alliance with Nana to find Lucy also never went anywhere. For the price of recalibrating and repairing some damage to his cybernetic parts, he agrees to aid Kurama when the scientist rescues Nana and reunites with Mariko, but breaks from this to pursue the object of his hatred, Lucy.

In the last episode of the anime, Bandō is defeated again by Lucy, who simply tells him that they will never meet again before leaving him lying on the beach. It is implied that he survives, although the extent of any new injuries that Lucy may have inflicted on him is unclear. 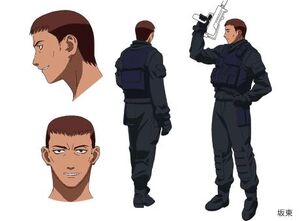 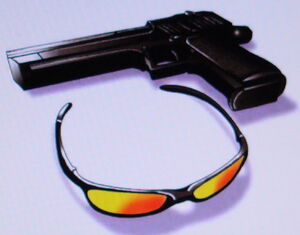 Bando's sunglasses and Desert Eagle.
Add a photo to this gallery

Retrieved from "https://villains.fandom.com/wiki/Bando_(Elfen_Lied)?oldid=3764952"
Community content is available under CC-BY-SA unless otherwise noted.