Kill all of Earth's children to end the human race.

Turn Earth into a wasteland.
Kill Zyurangers for foiling her plans.

Witch Bandora (魔女バンドーラ, Majo Bandōra) is an evil witch and the main antagonist in Kyōryū Sentai Zyuranger. She is an extraordinarily powerful and formidable sinister spellcaster who leads an evil group of monsters called the Bandora Gang. She was the one who has caused extinction of an ancient civilization along with that dinosaurs and she wrought enormous destruction upon arrival to Earth shortly after her freedom from imprisonment, and can single-handedly take out all Zyuranger members (as seen subduing Prince Burai, undeniably the strongest member of Zyurangers).

In many ways, Bandora is an ideal boss a subordinate can have: mostly tolerant of her minions' failures and hence they go unpunished most of the time even with their mistakes. The harshest punishment they get is being clubbed by Bandora with her magic wand for their incompetence. But when they pull off something satisfactory, they get rewarded with recognition and vast praises. Bandora has a luck with her men: they are genuinely loyal to her and although her minions plot in rare occasion it is for their personal issues and never outright treasonous so internal conflict that exists in most villains are very nearly non-existent. This could be that due to vastness in the power gap her minions do not dare crossing her. But even so, the relationship between Bandora and her men are genuinely harmonious.

But Bandora displays no mercy to humanity and to Zyurangers, and she would go any length and measurement, even risking her own life to annihilate them. Such cruelty, coupled with compassion she displayed to her minions, was attributed to the tragedy which claimed the life of her only son, Kai, who fell to his death after being chased away by the angry horde of dinosaurs for breaking their eggs for fun. Not only her loss being the reason why she established a pact with Dai Satan to begin with, but also of her apparently viewed her men as family of sort, though it apparently took the arrival of the baby of Grifforzer and Lamie to fill the void Kai left behind.

170 million years ago, Bandora was originally queen of the Fairy Tribe on Earth until her son Kai was inadvertently killed by a Tyrannosaurus. Torn by grief, Bandora went mad and sold her soul to Dai Satan for the power to avenge her son and slaughtered the dinosaurs. At part of the pact, Bandora lost almost all memory of Kai, though it reflected in her hatred towards all children, as she and her followers were all sealed away on the planetoid Nemesis.

However, in 1992, Bandora was released by astronauts who are sent to explore Nemesis when it appeared near the Milky Way. Killing the adult astronauts as her way of thanks, Bandora takes two child astronauts hostage to kill at her leisure as she and her posse return to Earth and created Bandora Palace. However, having forseen this, the ancient peoples placed their greatest warriors, the Zyurangers, in suspended animation to fight Bandora the moment she was freed. Though the Zyurangers save the children, Bandora moved Bandora Palace to the moon, which she considered an ideal world (due to stillness of the moon and Bandora considers Earth to be annoyingly noisy) and from where her forces attack from throughout the series. Her usual targets are children, presumably a remainder of the pain of losing Kai, sending Dora Monsters after them sometimes.

Eventually, Dai Satan sends a reanimated and loyal Kai to ensure Bandora summons him while defeating the Zyurangers. Though Bandora made attempts to cuddle her now distant child, she sheds tears over Kai's second death which ultimately stripped her of her powers as she and her henchmen are sealed away once more by Daizyujin in a vase that he hurls into the vastness of space. However, though trapped Bandora is able to start fresh when she cradles Grifforzer and Lamie's newborn son.

Undaunted of her imprisoned state, Bandora vows to rebuild her powers and challenge Daizyujin once more no matter how many eras and years it might take her. But for now, she is happy with spending quality time with the baby of Grifforzer and Lamie as its god-grandmother.

Upon first sight, Bandora looks like fragile elderly woman with funny custom. But beneath her humorous facade lies a powerful dark witch with god-like powers whose power can reach from moon to Solar System. Upon her first encounter with Zyurangers (before Burai joining the team), Bandora effortlessly wiped the floor with the Sentai team. Only when Zyurangers summoned Daizyujin robots Bandora withdrew not with fear, but with interested curiosity. She is seen to enter and exit The Continent of Despair, a deadly and hostile dimension where many brave warriors said to have perished, as if it is her own living room.

Bandora is seen to be one step ahead of Zyurangers; when Zyurangers had to reach a strange land to obtain special weapons (they had to pass tests to obtain those weapons), Bandora was already there before them. Bandora is seen to be scheming in which she took an advantage of Burai's misunderstanding of Zyutangers, turn the two sides against each other (and temporarily knocking Daizyujin out of commission), draining Burai's life force and making his life span terminal. To ensure Burai does not become a major threat, Bandora located and destroyed time chamber room that prevents Burai from dying, which ensured his eventual demise.

Bandora possesses a variety of dark magical powers, and her most used one being her ability to grow her minions and Dora Monsters to giant size through her DoraScepter. She also rides a magical velocipede. 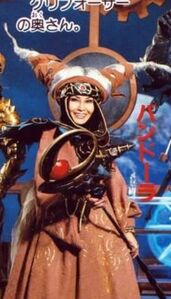 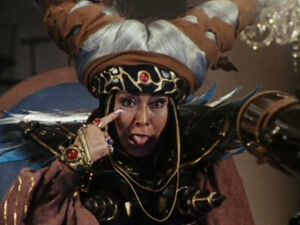 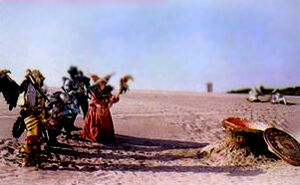