Attempting to kill Batman and Robin.

Serve Poison Ivy and Mr. Freeze with their goals.

Kill Batman and Robin (all failed).

Bane a major antagonist in the 1997 film Batman and Robin. He is the strong enforcer for Poison Ivy. He was created by Dr. Jason Woodrue and was given his name as intended to be a "bane of humanity".

He was portrayed by Michael Reid MacKay in his normal form, who also played The Mummy in Monster Squad, The Man Who Can't Breathe in Insidious: Chapter Three, Jason Stryker in X2: X-Men United and Theodore Victor Allen in Se7en.

And he is portrayed by the late Robert Swenson in his transformation.

In the case of Batman & Robin, and unlike the standard version of this character which lacks an actual name, Bane was originally 'Antonio Diego', a violent but diminutive serial killer serving a life sentence in the South American jail, Pena Duro, and the sole surviving volunteer for Jason Woodrue's 'Project Gilgamesh'. He was selected by Dr. Woodrue to be the initial test subject for a 'super soldier program'. His hair was first permanently removed and he then had five holes drilled into his skull with one on his chest, before being strapped to a table in front of an audience that comprised of foreign dictators, military generals, commanders, commissars, sheiks and terrorists, among other people. Dr. Woodrue placed a mask with three holes snaked to his skull on his head. He eventually pumped massive, concentrated doses of the experimental drug Venom into his skull and circulatory systems.

Diego was screaming in pain for the first 15 seconds before his body started changing. The experiment was a success. Originally he was diminutive and scrawny, but after the Venom becomes effective, he becomes a hulking, vigorous, dynamic and monstrous abomination (yet docile and deluded) with almost inhumane strength. He was "the ideal killing machine" as Dr. Woodrue called him. Unlike most comic book appearances, he did not retain his above average intellect but was reduced to a less than average IQ. He was barely capable of speech and growls, snarls, and speaks only one or two word phrases (which was one of the many aspects of the film heavily criticized by fans and critics).

After Pamela Isley became Poison Ivy and killed Dr. Woodrue, she took Bane to Gotham City as her new enforcer. Bane scared a gang out of a Turkish bathhouse so Ivy can claim it as her new hideout. He also fought off the Arkham Asylum to retrieve Mr. Freeze's cryogenic armor and freezing gun from the storage locker.

At Mr. Freeze's hideout, Snowy Cones Ice Cream Factory, Batman and Robin, along with Commissioner Gordon and the Gotham City Police Department, investigated the hideout for clues to the criminal's whereabouts. During the investigation, Batman and Robin discovered that Poison Ivy was close by after getting a dose of her pheromone dust. Following its direction, they began to look for Ivy, only to be confronted and challenged by Bane, who proved more than a match for the Dynamic Duo with his ferocious strength. Ivy and Bane successfully escaped arrest and fled.

Bane eventually accompanied Mr. Freeze to Gotham Observatory and assisted him in taking control of the new telescope, also placing Freeze's icicle bombs around the area.

When Batman, Robin and Batgirl arrived to stop them, Mr. Freeze ordered Bane to kill Batman's two young comrades while he fought the Dark Knight himself. Bane encountered Robin and Batgirl in a cave within the cliffs on which the observatory was built, pinned them both against a wall and attempted to strangle them to death. Robin and Batgirl kicked Bane's main supply tube, disconnecting it from the back of his head and stopping the Venom circulation to his brain in the process. This in turn caused Bane massive withdrawal, and quickly reverted him back to his skinny self. He was left behind by Robin and Batgirl as they escaped, but what happened to Bane afterwards is ultimately left ambiguous, as there is no evidence that he died in the fall of the Telescope Platform that occurred shortly afterwards. However, what appears to be the pool of Venom around him is seen around part of the fallen telescope, hinting that he may have been crushed to death. 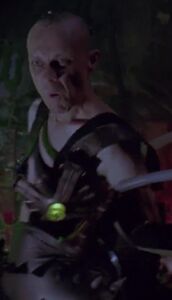 Antonio Diego in his normal form. 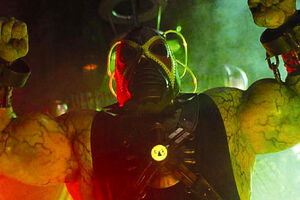 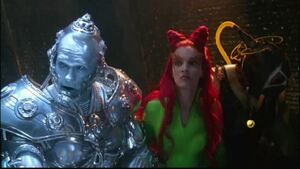 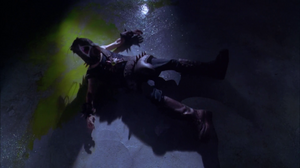 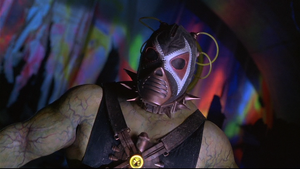 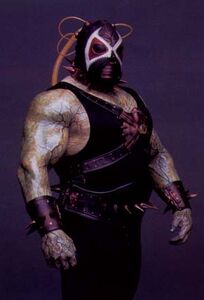 Retrieved from "https://villains.fandom.com/wiki/Bane_(Batman_%26_Robin)?oldid=3554433"
Community content is available under CC-BY-SA unless otherwise noted.