Co-leader of the League of Shadows, mercenary, terrorist

Bane is one of the two main antagonists in the 2012 film The Dark Knight Rises. He is a strong, brutal terrorist determined to annihilate Gotham City as the supreme commander of the League of Shadows, and the protector-turned-accomplice of Talia al Ghul. He is portrayed by English actor Tom Hardy.

Bane is said to have been born and raised in a hellhole of a prison located in Morroco called the Pit, where Talia al Ghul, daughter of Ra's al Ghul, and her mother were imprisoned. After their cell was left unlocked, the prisoners attacked and murdered Talia's mother and they would have also killed Talia if Bane had not intervened. He protected her, determined to ensure that the one form of innocence to exist in the Pit was kept alive as the prisoners' redemption.

Bane brought Talia to the wall that one could climb up to escape, though no one had ever succeeded. As the other prisoners attacked Bane, he watched as Talia managed to climb to freedom. She went to her father and the League of Shadows, who returned to the Pit to rescue Talia’s savior. But by that time, Bane’s face had already been badly mutilated by his fellow prisoners and though the prison doctor saved his life, he was left in constant agony. He was brought into the League of Shadows’ fold and given a mask created by the League that pumped a constant stream of gas into his system which kept the pain at bay.

Bane and Talia were trained by the league, but to Ra’s, Bane was a monstrosity and a constant reminder of the nightmare he had left his wife to die in. Finally Bane was excommunicated from the organization and he became a mercenary.

After Ra’s al Ghul's death, Talia inherited his mantle and brought Bane back to the fold to launch a multifaceted attack to destroy Gotham City and fulfill what Ra’s had failed to finish. Bane was also responsible for a coup in West Africa which brought John Dagget, Bruce Wayne's business rival, exclusive access to the resources there, bringing his company into prominence and leading to Bane attracting the attention of the Central Intelligence Agency. Their working relationship was later used to bring Bane and other League mercenaries to Gotham City.

Talia took on the identity of Miranda Tate, who funded Wayne Enterprises construction of a fusion core, which she and Bane planned to use to destroy Gotham. Bane went after a nuclear scientist named Leonid Pavel, who tried to escape him by turning himself over to government agents. However Bane got himself captured, then had his men attack the plane he and Pavel were in. He faked the death of the nuclear scientist and made it look as if the plane had crashed, successfully escaping with Pavel. Bane then moved his army into Gotham and began working for Daggett under the pretense of helping him absorb Wayne Enterprises. However Bane was just using this and Daggett’s resources as part of his own plans. He attacked the stock exchange and, using fingerprints obtained by Selina Kyle, Bane bankrupted Wayne. But instead of Daggett taking over, Bruce gave command of Wayne Enterprises to Talia. Bane then killed his “employer”, before continuing with his plans.

Bane had Selina lead Batman to him in exchange for his forces not pursuing her anymore. He revealed he knew the Dark Knight's secret identity, before he fought and easily beat him, saying his trickery and deception were effective only against those uninitiated into the League of Shadows, unlike himself and Batman. He told the Dark Knight that he’d taken over the League and he was continuing with Ra’s goal of destroying Gotham. Bane then revealed that he’d found the armory Lucius Fox had been storing equipment meant for Batman and his men took it for themselves, before he broke Batman's back.

Bane delivered a crippled Bruce Wayne to the Pit and stated that he wouldn't kill a man that did not fear death, as he intended to psychologically torture him by showing him the slow demise of Gotham City while Bruce being unable to do anything. Bane said that he would feed the people the hope that they could survive, before he destroyed the city and only when Gotham was ashes, did Bruce have his permission to die.

Bane returned to Gotham to begin his plans, taking Wayne Enterprise’s Board of Directors hostage so as to get the fusion core. He then made Pavel turn the core into a bomb and lured almost the entire Gotham police force underground in search of him. Bane went to the occurring football game and set off a series of explosions throughout the city, using concrete that he had laced with explosives, trapping the police and destroying most of the bridges connecting Gotham to the outside world. Bane proceeded to address the people of the city, declaring martial law and telling them they would claim what was rightfully theirs and take down their oppressors, the rich and powerful. Bane made Pavel reveal himself to the people of Gotham to let them know that Bane fabricated his supposed death and that the reactor was now an armed thermonuclear bomb. He asked Pavel if he was the only one who could disarm it and when the scientist confirmed this, Bane killed him by breaking his neck to ensure the bomb couldn't be disarmed. Bane also told them that a citizen in the city (Talia) had been given the detonator to the bomb and any attempt to leave would result in it being detonated. However the bomb was going to go off anyway in a few months; Bane simply wanted to torture the people with hope that they could survive, as he had in the Pit, so that they would struggle against one another to "stay in the sun," before he killed them all. He first headed to Blackgate Prison, where he read a speech written by Commissioner Gordon to the press and the prisoners of Blackgate, revealing the monster Harvey Dent had become. Bane declared that Gotham would be taken from the corrupt who kept the people down with their lies of opportunity, then blew open the prison and released all the convicts, before letting the city descend into anarchy.

But as the time of the bomb’s detonation drew close, Batman returned, having escaped the Pit as Talia had. He coordinated with Selina, the police, and Lucius to free all the police officers trapped underground, who he led against Bane’s army while some other members of the police worked on stopping the bomb. Bane fought Batman personally, but this time, the Dark Knight was able to match him, damaging his mask and weakening him. Bane was beaten and Batman demanded to know where the detonator was, but Talia then revealed herself, stabbing the Dark Knight in the side. After explaining her and Bane’s stories to Batman, since he’d believed that Bane had been the child of Ra’s al Ghul, Talia then left to ensure the bomb’s detonation, leaving Batman with Bane so that he would be killed in the nuclear blast along with the citizens of Gotham. However, Bane tried to kill Batman right away, but Selina arrived, blasting him with the Batcycle from point-blank range, killing him.

Bane is ruthless and cold, perfectly willing to slaughter millions of people as Ra’s al Ghul sought to and killing people with his bare hands without a care. Despite being cast out of the League of Shadows, he is fully immersed in the organization's beliefs and ideals, willing to rejoin the League and be given the chance to lead the raid against Gotham. Bane’s time in prison has affected him greatly, to the point that he seeks to make Gotham experience the same situation the inmates did. He commands absolute loyalty from his men and he is perfectly willing to kill them in pursuit of his goals.

As a contrast to his brutality, Bane generally behaves like a stereotypical aristocratic gentleman, acting jovial and polite towards both ally and enemy. His habit of casually talking to people he plans to hurt lends him an disarming presence, allowing him to maintain dominance in any situation. The only person Bane seemed to truly care for was Talia.

Bane has extremely high strength, durability, and reflexes and when combined with his League of Shadows training, he is a very strong opponent. He was able to take repeated punches from Batman with little to no effect and even outfight him. Bane is also extremely cunning and very intelligent, frequently misdirecting and tricking his enemies, and his combination of brains and brawn make him very dangerous.

His mask also functions as a breather that dispenses a type of anesthetic that keeps his facial pain at bay. However, it's also his weak point, as without the mask he suffers crippling pain from injuries he has sustained inside The Pit. 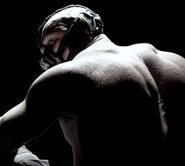 Bane from a view behind.

Bane about to snap necks.

Bane in his Gotham City attire.

Bane as a lego minifigure.

Bane unmasked, before his injury.
Add a photo to this gallery

Calm down, doctor. Now's not the time for fear. That comes later. - To Dr. Pavel before launching him out of the aircraft.

Speak of the Devil, and he shall appear. - To his "employer" before killing him.

Not as serious as yours, I fear. - Bane to Batman on their first bout.

Let's not stand on ceremony here, Mr Wayne. - Bane to Batman on their first fight, revealing that he knows Batman's true identity.

I am the League of Shadows. I am here to fulfill Ra's Al Ghul's destiny! - Bane to Batman during their first fight.

As yes, I was wondering what would break first. Your spirit...or your body. - Bane breaking Batman's back.

Do you feel in charge? - Bane to his "employer".

Let the games begin! - Bane before blowing up the football field.

We take Gotham from the corrupt! The rich! The oppressors of generations who have kept you down with myths of opportunity and we give it back to you...the people. - Bane during his speech.

We both know that I have to kill you now. You'll just have to imagine the fire! - Bane's last words as he's about to kill Batman, before his death.

Retrieved from "https://villains.fandom.com/wiki/Bane_(Nolanverse)?oldid=902609"
Community content is available under CC-BY-SA unless otherwise noted.