Member of the Resistance

Helping the Resistance fight against the Machines.

To help the Resistance win their war against the Machines (as Bane).

To deceptively extract Neo and later kill him (as Agent Smith).

Bane is a fictional character of The Matrix trilogy. He first appeared as a member of the Resistance who later became an affiliated puppet of Agent Smith. He served as a major antagonist in The Matrix: Revolutions.

He was portrayed by Ian Bliss.

Bane was a bluepill rescued by the fifth One and into the real world.

Bane joined the Resistance founded by the people of Zion. Bane hoped that one day the war against the Machines will end.

The Smith Virus entered inside Bane and he was forced to kill Trinity. Bane sees Neo and because he was corrupted by Agent Smith, he attacks Neo and they fight. During their struggle, Neo's eyesight was permanently destroyed as a result of Bane using an severed elctrical cable by sticking it right into the left eye.Ban carried on taunting Neo's inability to see things, as he slipped away into the darkness. He tried to attack Neo with a jackhandle, but realises that blinding Neo proved ineffective and was also a grave mistake, when the blinded Neo dodged the attack. He tried attacking again, but Neo grabbed the jackhandle just in time and said right in his face, "I can see you". This was true. As part of being The One, Neo was also allowed to see the golden auras of anything as long as those things were connected to The Source. He could not see Bane himself but he could see Smith's programming inside of him. He knocked Bane to the ground. Bane, however gloats that they were not done yet. Neo strikes Bane's head with the jackhandle killing him instantly. In Neo's new special sight, this was represented by Smith's head shattering, and his body crashing to the floor and exploding.

Bane was a kind soldier. He has trusted in Neo for many days.

With the Smith Virus inside Bane, he has all the mannerisms from Smith. 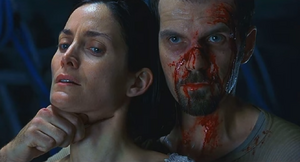 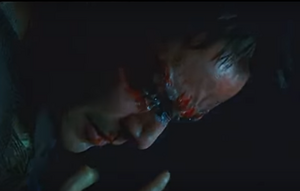 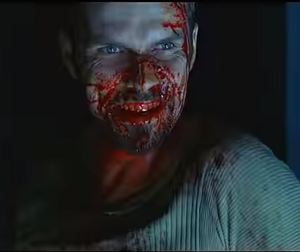 Bane's evil smile as he sees what he has just done 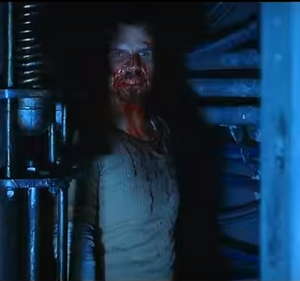 Bane teasing and taunting poor Neo as he slips away 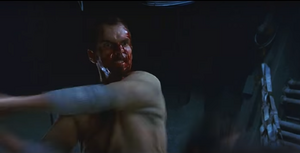 Bane tries to attack Neo with a jackhandle

I can see you 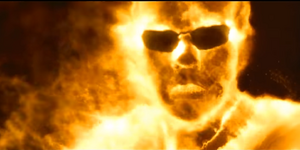 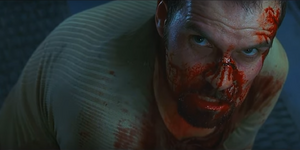 Bane's death at the hands of Neo Anderson

Retrieved from "https://villains.fandom.com/wiki/Bane_(The_Matrix)?oldid=4240207"
Community content is available under CC-BY-SA unless otherwise noted.