Get his factory back from the Cult of Cobra.

Bane is an antagonist in the animated TV series Young Justice. He is a supervillain and enemy of Batman.

He was voiced by Danny Trejo, who also voiced Newtralizer in the 2012 Teenage Mutant Ninja Turtles TV series.

Bane is the leader of a venom operation at Santa Prisca where he got competition by the Cult of Cobra. Eventually, the cult offers to retreat should Bane be able to finish their master's champion in combat. Confidently, Bane enters the arena and is surprised when he is given a supply of Venom. After injecting himself, Bane turns far more powerful and is ready to fight the champion but the champion Mammoth is injected with a mixture of Venom and Project Blockbuster. Bane is defeated and severely beaten up.

This causes to the different groups fighting for control of Santa Prisca, leading to a shootout between the cult and Bane's mercenaries in the jungle. Unbeknownst to them, the Young Justice team is sent into the jungle. Accidentally, Kid Flash drops right in front of Bane who opens fire at him. Bane is stopped when Superboy attacks him and lunges him into a tree. Bane and his men are tied up. When he overhears the team arguing about their next move, Bane decides to use the situation to his advantage. He offers them to take them into the factory through his secret entrance. When Miss Martian, expecting Bane to be hiding something, tries to read his mind he blocks her from his secrets by reciting football scores in spanish. The team decides to trust Bane, who leads them into a secret tunnel. He leads them into the factory. Once inside, he attacks the present cultists and therefore gains the attention of the entire cult including Mammoth. Bane then sneaks off while the cultists fight the team, hoping to regain control off the factory once the cult is weakened.

Severely outmatched, the team decides to fall back through the tunnel but once they get out the other side they are confronted by Bane who reveals to have triggered the exit with explosives. He tells them that he played them from the beginning, hoping that they would either defeat his enemies or die trying which would mean that the Justice League would avenge them. Claiming that blowing the tunnel with the team inside would have the same effect, Bane attempts to blow up the explosives but Kid Flash swiftly takes it from him and Miss Martian lifts Bane into the air. He is then knocked out by Superboy. He is left tied up while the Young Justice team returns to the factory to take down the cult.

Much later, Bane teams up with the Light. He allows them use of Santa Prisca for their plans and the Light chooses the island in their attempt to recruit Superboy, Miss Martian and Artemis. When the plan fails, Bane joins in the battle. He powers himself up with Venom but is outsmarted when Zatanna creates multiple holograms of Robin who all attack Bane. The distraction allows the real Robin to take Bane down. 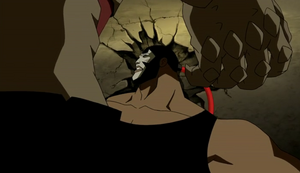 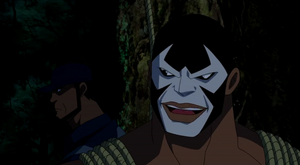 Bane talks to the team, offering to help them 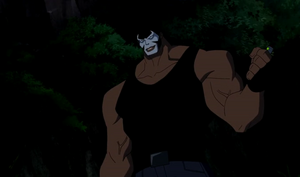 Bane is about to detonate the explosives