Waging war on his own people.

Subjugate all within his country to his rule.

Control and manipulate every aspect of people's lives through every known methods and means.

In this game, Banglar owns an army with advanced arsenals. He uses his military powers to attack a city in an attempt to seize power, prompting the heroes Aqua Jack and Aqua Jill to fight his forces. After the heroes fight their way through hordes of Banglar's military, they destroy the wall protecting Banglar's base, and proceed to invade his office and gun him down. However, the one they shot down is revealed to be a robotic double, as Banglar had already escaped the place, showing up on a screen and taunting the heroes from safe distance. Aqua Jack and Jill return to their base empty-handed.

Banglar is the current president of the unnamed country where the game is set (no doubt inspired by USA). He quickly turned the once prosperous nation into a nightmarish totalitarian state, oppressing and terrorizing people with his military forces and brainwashing them into submission. The fiercest and the most elite soldiers within the military are selected and became agents of Ninja Corps, an elite paramilitary force within Banglar's military. Ninja Corps worked from the shadows as Banglar's eyes, ears and daggers to those who dare defy the dictator.

A small resistance force, led by the charismatic Mulk, started a plan to overthrow Banglar's regime. They started developing cyborgs, which would be tasked with infiltrating Banglar's forces and assassinate him.

The cyborgs, which were named the Ninja Warriors, were finally completed, and were about to enter the testing stage. However, the tide turned against Mulk, as Banglar's forces finally found his hideout and started attacking immediately. With no option left, Mulk decided to send the Ninja Warriors to fight without testing them.

The Ninja Warriors in the arcade successfully defeat Banglar's forces everywhere they meet them, eventually invading the government palace and killing now-defenseless Banglar.

In remake games Banglar escapes from his residence, thereby extending the plot. After fleeing from his presidential palace Banglar directs his forces from hidden military bases. But Ninja Warriors infiltrate those bases and destroy them as well. Retreating to final underground base, Banglar refuses to go down without a fight and puts up a ferocious last stand with his secret weapon along with his remaining soldiers. Desperate as Banglar was, he and his troops were ultimately no match for the lethality of conscienceless Ninja Warriors, and Banglar fell in the battle.

With Banglar dead, the Ninja Warriors self destruct, obliterating the entire base along with Banglar's corpse. Banglar's death causes a revolution, with Mulk becoming the new president. However, Mulk further develops his cyborgs, which in the end become a force far stronger than Banglar's military power. And so, history repeats itself. 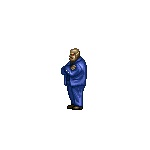 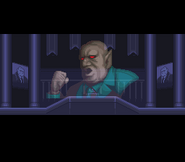 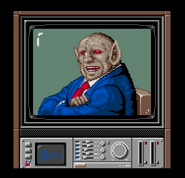 Add a photo to this gallery
Retrieved from "https://villains.fandom.com/wiki/Banglar?oldid=3228387"
Community content is available under CC-BY-SA unless otherwise noted.