Eradicate and/or corrupt all life.

The Banished Pantheon are an enemy faction found in the online game, "City of Heroes" and are comparable in some ways to a doomsday cult - they are an ancient cult devoted to the worship of dark gods long banished from the world and are led by evil spirits taking the form of totems and masks.

The Banished Pantheon despise all living things outwith those who are part of their society and take pleasure in killing anyone or anything, often reanimating them as zombies and other undead beings for use in their evil schemes.

The living human servants are no better and just as perverted as their spectral masters, taking pleasure in killing anything and anyone, using deadly elemental powers and necromancy to accomplish this goal. They can be found around the spirits, worshipping and protecting them.

Their zombie hordes are very formidable: using the weaponry of past wars, these walking husks of fallen soldiers boast considerable powers. The glowing symbol on their chests seem to be the source of their resurrection, or at least what allows them to be controlled. The living members of the Pantheon also bear these strange glowing markings.

This group controls almost completely the zone of Dark Astoria in Paragon City and has a strong presence in the graveyards of Striga Isle and Sharkhead Isle. They are also seen spilling out of Dark Astoria into Talos Island under the cover of darkness. 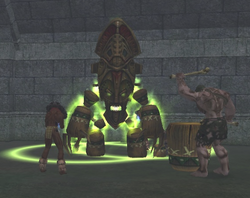 Add a photo to this gallery
Retrieved from "https://villains.fandom.com/wiki/Banished_Pantheon?oldid=3524021"
Community content is available under CC-BY-SA unless otherwise noted.