The Bank Robbers are a gang of one-time villains from the FOX animated sitcom The Cleveland Show, only appearing in the episode "The Essence of Cleveland". They are an unnamed group of bank robbers, who wear multicolored masks and steal money and kill people.

They were all voiced by Kevin Michael Richardson.

In the cold opening of "The Essence of Cleveland", a robbery took place at the Fifth National Bank. A pair of masked robbers welded open a hole in the vault and walked in, taking all the money out of it, and putting it in burlap bags. A guy in a green mask was then shown, standing on top of a desk, pointing two guns at the various people, who happened to be going to the bank at the time, keeping innocent bystanders and cops alike, on their knees and with their hands in the air.

A purple masked fellow, held up a woman at the front counter, pointing a gun at her, and waiting as she put the money in the bag. The woman then pressed a silent alarm button with her foot. He then asked her to give him one more roll of quarters, claiming that it was laundry day and that he needed the exact change to pay for the laundromat machines. At this time, the green-masked robber looked at his watch and signaled that it was time for them to flee the scene.

The moment the got out of the Fifth National Bank, the cops had already arrived on scene and told them to drop their weapons. The bank robbers of course, ignored them and started firing at them, as they ran away, getting shot back at. Both teams were missing, and a bald headed man, who strangely enough, wasn't wearing a mask, pulled up in a black van and got the four bank robbers to hop in and drive off. They crashed into police cars as they backed out and were chased by the ones that they hadn't destroyed then they drove forward.

In the car chase down the street, cops shot the robbers and the robbers shot back. Destruction was caused, throughout the city of Stoolbend, along the way, and one cop was was overturned. The robbers then pulled into a narrow alley way, where Cleveland Brown happened to be at the time. Cleveland was at a miniature hat stand, which was just a table in the middle of the alley, with some Italian guy, selling various hats. Cleveland tried on a bowler's hat and sang a little song about it, as he did. Just then, the van driven by the bank robbers skidded onto the scene and Cleveland screamed in absolute terror, as they came his way. It is unfortunate that he did not have nearly enough time to get out of the way, getting himself hit by the van, and sending his bowler hat, flying through the air and floating back down to the ground in slow motion for dramatic effect.

The aftermath of this incident, would be Cleveland being rushed to the hospital. As Cleveland was lying down on the hospital bed, his one question was whether or not the hat was okay. It probably wasn't. Ridiculously enough, despite that van coming crashing into him as 70 mph, Cleveland only broke his thumb. 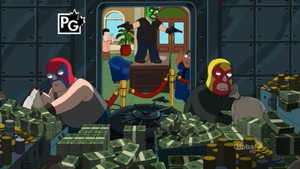