Conquer the Brain Worlds and pollute them to make them suitable for them to live in.

Destroyers
The Banki Clan Gaiark are the main antagonist faction of Engine Sentai Go-onger. They are a bureaucratic and expansionist society of machine beings who travel the BraneWorlds polluting them to make them suitable for their kind.

Originating from the Machine World, the Gaiark began a campaign to corrupt and pollute the other 11 Braneworlds to make them suitable for their kind to thrive in. In the course of this invasion, the Gaiark destroyed the Prism, Sound and Magic Worlds. The Engines resisted the Gairk, but were driven out of the Machine World and forced to flee to the Human World, where they met and bonded with five humans, turning them into the Go-Ongers.

Traveling to the Human World, the three Pollution Ministers established Hellgailles Palace on an island in the middle of the sea and began working to pollute the Earth to make it suitable for them. However, they faced resistance from the Go-Ongers. Some time after Land Pollution Minister Yogostein was destroyed, Crime Minister Yogoshimacritein arrived to take command of the Human World invasion personally.

After the defeat of Yogoshimacritein and his forces, the remaining Gaiark fled to the Gunman World where their leader Pollution President Batcheed resided and was personally spearheading an invasion. They later formed an alliance with the Gedoshu to pollute the planet but this plan was foiled by the combined efforts of the Shinkengers and Go-Ongers.

Some time following Batcheed's destruction, he was succeeded as leader of the Gaiark by the nearly identical Pollution President Babatcheed. Babatcheed attempted another invasion of the Human World by luring the Gokaigers into the Gunman World and sealing them there so they would be free to invade, the Gaiark launched their invasion only to be fought against by the Space Empire Zangyack, who were also attempting an invasion. 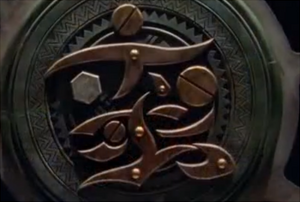