Villains Wiki
Register
Don't have an account?
Sign In
Advertisement
in: Burglars, Phineas and Ferb Villains, One-Shot,
and 27 more

Bannister's Thugs are the secondary antagonists of the Phineas and Ferb episode "Sidetracked". They are three unnamed burglars who are under the employ of Professor Bannister.

The thugs were first seen during the beginning of the episode, where they broke into a warehouse in downtown Seattle to steal some technology. As they drive off in their truck with the stolen equipment, Perry the Platypus pursues them on their tail with a motorcycle. Though Perry was able to use a grappling hook to catch the truck, he is stopped by incoming C.O.W.C.A. Agent Lyla Lolliberry (Professor Bannister's nemesis), who tells him that he has no jurisdiction in Canada as they already crossed the border. Lyla climbs onto the truck, but her weight causes the donut arm to break, causing the three thugs to drive away scot-free. Perry is forced to return back to the U.S. as he is angry at Lyla for letting the thugs escape.

2 months later, Perry and Lyla were assigned on a new mission to protect the local Canadian symbol of national unity (Albert the Moose), despite Perry's bad blood with Lyla. As it turns out, Bannister arranged for Heinz Doofenshmirtz to kidnap and deliver the moose to him as part of their U.S.-Canadian evil scheme exchange program. As Lyla and Perry confront Bannister in his helicopter, Bannister reveals his true plan to destroy Canada's national pride and annex Canada into his real homeland Greenland, so that he can put in a new national anthem for Greenland and reinvigorate its low national pride. Bannister then presents his new magnetic robots called Me-Positive & Me-Negative, and that he sent the thugs (who are inside the helicopter playing cards) to steal the parts from Seattle to make the androids. It was then Lyla revealed that she only let the thugs escape because she would trace them back to Bannister in his plot, which impressed Perry to abandon his grudge against Lyla for good.

Bannister sets his androids to attack Lyla and Perry while Doofenshmirtz (upon realizing how complicated Bannister's plot really is) decides to go play cards with the thugs. However, the thugs engage into a brawl with each other and Doofenshmirtz after the latter wins a game, just as Lyla and Perry manage to defeat the androids before having Bannister arrested. The thugs are then arrested along with Bannister for their crimes, as they are last seen being escorted into a police van by a state trooper. 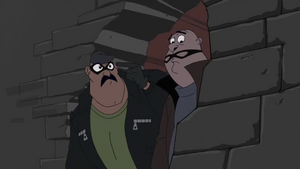 One of the thugs reminding the other to put his mask on. 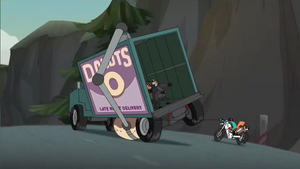 The thugs attempting to free their truck from Perry's grappling hook before their escape. 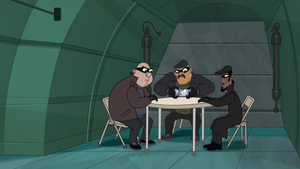 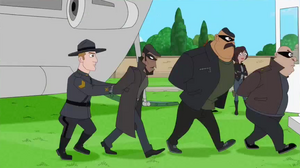 The thugs being arrested for their crimes following Bannister's arrest.