Seducing and drinking bloods of men

Devour men who wished them.

Paranormal Femme Fatales
The Baobhan Siths (pronounced baa'-van shee) or Boabhan Siths, are the particularly evil and dangerous type of vampire-spirits from the folklore of the Scottish Highlands and the depths of Scottish mythology, like the Banshees or the Leanan Sídhes, the Boabhan Siths are considered female but are usually temptresses who use their beauty to lure men into dance before brutally killing them: their love for human blood makes them similiar in some ways to Redcaps - a vicious goblin from English folklore, however unlike Redcaps the Boabhan Sith are more akin to vampires than goblins. Legends regarding these vampire-spirits depict that they almost always appear in groups and rarely, if ever, appear alone.

A common tale is told of four young friends who set off on a hunting trip in the glens, benighted the men take refuge in an abandoned Shieldig (small cottage). Darkness falls quickly and the men build a fire in the hearth and set about entertaining themselves for the night. One of them is a talented singer, and sings as his companions begin to dance around the room.

One of the men wishes that they had the company of women and speaks as such. Seconds after he has spoken 4 women appear at the door and begin dancing with the three men. Suddenly the atmosphere changes and the women become frenzied, imbued with supernatural strength they tear at the dancers and blood begins to spill around the room.

Terrified the young man who was supplying the music runs out of the door with one of the creatures at his heels. He takes refuge between the horses and this seems to create a barrier over which the creature can not cross. He spends a long and cold night between the horses, with the Boabhan Sith circling around waiting for an opportunity to pounce on him. At last dawn breaks and the creature disappears.

When he returns to the shieldig a ghastly sight greets him. All his companions are dead, sprawled around the floor in agonising positions completely drained of blood.

In another tale the hunters took refuge in a cave. Each of the men said he wished for his own female companions were there that night, but one of them named Macphee, who was accompanied by his black hound, said he prefers his wife and to remain at home with her. At that moment some young women entered the cave, and the men who had wished for their sweethearts were killed. Macphee was protected by his hound who drove the evil women from the cave. 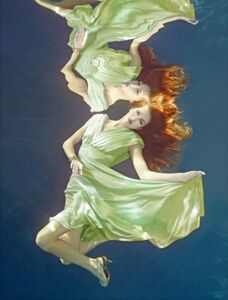 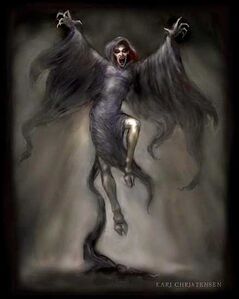