The Baphomet is the demon boss of the first chapter in the videogame Agony. Baphomet will return in the spin-off game Sucubuss as the main antagonist.

He is a gigantic demon in a human shape which posses various goat characteristics. Baphomet has female breasts, while it has animal-like genitalia. Most of which though that Baphomet was genderless, while technically Baphomet is a male.

He has four arms, crossed legs, very strong goat hooves with spikes getting out of his shoulders.He also appears to having giant angel wings which are colored white. His head appears to be a doubled face of a goat with a open split from his forehead, with sporting two very long horns. He appears to be having three yellow eyeballs. 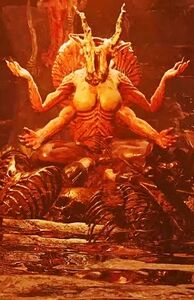 Retrieved from "https://villains.fandom.com/wiki/Baphomet_(Agony)?oldid=3679745"
Community content is available under CC-BY-SA unless otherwise noted.