Abuse and torment its victims.

Baphomet is a demonic figure that appears in occult and folkloric traditions - although often confused with Satan of Biblical tradition, this entity is technically a different demon altogether and is widely believed to be an invention of medieval scholars. However, their attempts to demonize him may have worked a little too well, as Baphomet has been adopted by a few societies of the Left-Hand Path as a patron figure.

Originally, the Baphomet was illustrated by the late Eliphas Lévi. Baphomet appears to be a Sabbatic-Humanoid Goat creature, which is representing the Zero-energy universe, where both good and evil are apart of. Although, Lévi wanted to symbolize the equilibrium of opposites, that was very important to his conception of the Astral Light. Although others are implementing that the Baphomet represents the tradition of perfect social-order.

Future on, Baphomet became one of the most notable figures in Satanism. In some pictures, Baphomet's head can be seen inside of a inverted pentagram, where the Baphomet is having the role of attacking heaven with it's horns.

According to legend, Baphonet is a goat-headed fertility spirit (or demon) that was worshipped by practitioners of the occult - although there was little evidence of this actually occuring until later in history: he was also supposedly the secret benefactor of the Knight Templars during the height of the persecution against the Order (which was later renounced by the Catholic Church as unjust and the order was cleared of all wrongdoing).

Despite this, Baphomet became popular amongst those who opposed orthodox religion or order and became a patron of many different Left-Hand faiths, amongst them is theistic Satanism - he was seen as either a symbol or a literal being depending on the beliefs of the cult and could vary in function.

Baphomet's image is seen on some Tarot Cards and even the Reverse Pentagram, once again confused with Satan - in the 1980s the mass hysteria of Satanic child abuse spread rumors that cults worshipping Baphomet were involved in ritualistic child abuse and global conspiracy, it is worth noting, however, these claims were never supported by solid evidence and are largely considered false by those outside the conspiracy theory mentality.

In some branches of demonology, Baphomet is seen as a high-ranking ruler of Hell and one of Satan's many henchmen - this may go some way into explaining why the two demons often seem to share the same qualities. 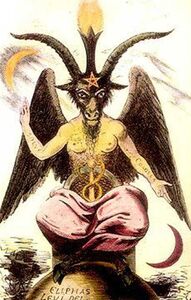 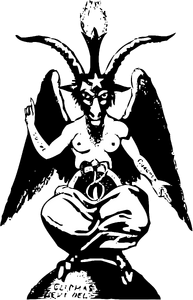 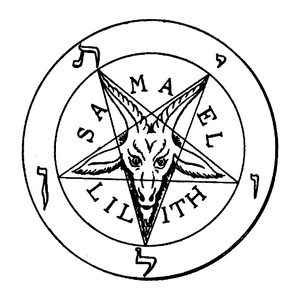 Retrieved from "https://villains.fandom.com/wiki/Baphomet_(folklore)?oldid=3377780"
Community content is available under CC-BY-SA unless otherwise noted.