President of the United States

Have sex with Connie Cunaman (failed).

Barack Hussein Obama II is the forty-fourth president of the United States of America and a minor antagonist in Brickleberry, only appearing in the episode "Obamascare". In the show, he is villainous for sexually harassing Connie Cunaman and forcing Michelle to marry him, despite her being a lesbian.

In "Obamascare", Barack Obama came to Brickleberry National Park to make a important speech. When Connie heard of this, she was worried because now she knew that her stalker had found her. Ethel Anderson thought she was crazy for believing in something like that. Connie went on to read inappropriate texts from Obama, where he said that he wanted to have sex with her. When Ethel went to look at her texts, there was nothing there and Connie said that these texts were Snapchats, explaining the disappearance.

Woody Johnson was in need of a kidney transplant but as Dr. Kuzniak explained, he could not get a kidney transplant because the rules of Obamacare said that he needs to wait twenty-four hours before he can get one. In the meantime, he would have to share a kidney with Steve Williams.

When Obama's car came to Brickleberry, he ran over BoDean Lynn and broke every bone in his body.

Obama showed up to the ceremony, where he was going to make a speech and Connie was extremely rude to him and scolded him for sending him sexual texts, which Ethel called him out on, buy Obama wasn't offended, as he thought she was being pretty funny. Despite this, Obama's secret service still grabbed Connie and dragged her away.

Connie was taken to a dark room, which Obama came into and locked them both in. In this room, Obama made obvious sexual passes at Connie and tried to force her to have sex with him. Connie refused because she was a lesbian. Obama claimed that Michelle was a lesbian too and that he likes a little challenge. Connie told Obama that because he's a married man, they can't have sex but Obama told her, "Yes we, can.". and duct-taped her mouth with a "Yes We Can" banner. Just then, one of his agents told him that he needed to go make his speech. Before leaving, Obama gave Connie one last ass fondle and told her that he'd be back for that ass.

During Obama's speech, Obama winked at Connie, who was still tied up and being held in place by his secret service agents. He awarded Woody Johnson for being a great American hero but when he did, Woody got sick and vomited all over him and then the entire audience. Everybody had to flee and Connie escaped without getting raped. FOX News gave Woody an award for heroism because he barfed on Obama.

At the end of the episode, Obama made another sexual phone call to Connie, saying that he'll be back soon enough to have sex with her for real. In the meantime, he sent her a image of his genitals to tide her over. She showed Ethel Obama's image as proof he was stalking her, but all Ethel could see was a black screen, thinking the phone was off. Connie said that it was a close-up. 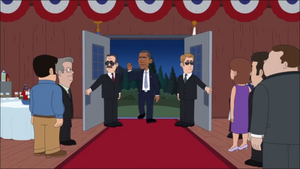 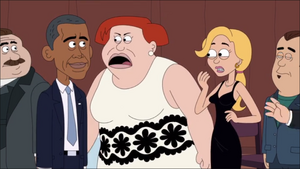 Connie Cunaman showing off her hatred for Obama. 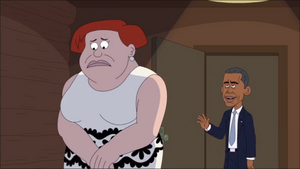 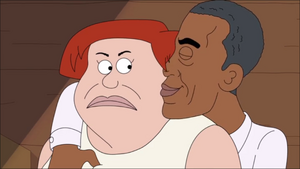 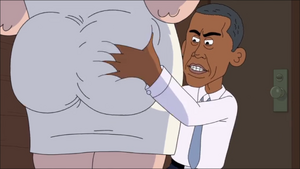 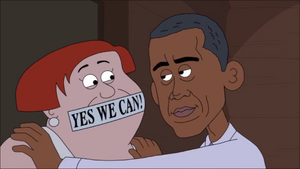 Obama silencing Connie's mouth with a "Yes We Can" banner. 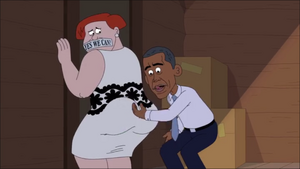 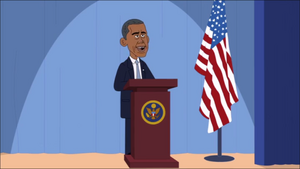 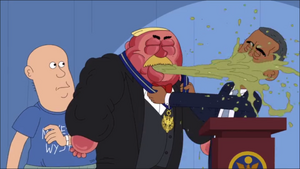 Woody vomiting all over Obama. 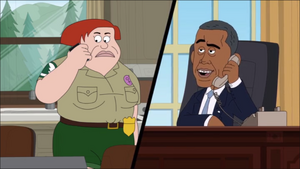