44th President of the United States of America

Barack Hussein Obama II is a fictionalized version of the real-life 44th President of The United States of America of the same name. The fictionalized version of him served as a one-time villain in The FOX animated sitcom The Cleveland Show, appearing in the episode "Harder, Better, Faster, Browner". In the show's lore, Obama was a high school rival of Cleveland's, whom he used to play basketball against.

Outside of his main on-screen episode, he has still been referenced many times in the series, before and after said episode.

In the "Pilot" episode, Lester asked The Guys what they thought about having a black guy join their friend group. Tim said that they already have a black president, so they might as well see how this plays out.

In "Brown History Month", Rallo was shocked to find out that Obama was the only black president in U.S. history.

In "Harder, Better, Faster, Browner", Cleveland reminisced about his high school years, saying he was the best basketball player at his school. He went into detail about a kid named "Barry Obama", who he had always slaughter on the court. Donna was shocked to hear that Cleveland was friends with the president as a child and helped Cleveland put two and two together, which blew his mind. When he realized that Obama became the president, while he was living a generic, substandard life, he could not help but feel inferior. Cleveland became fixated on this for the next few days, and would consistently bad-mouth him, which gained him nothing, at least at the moment.

After Cleveland and Kenny West performed "Be-Cleve in Yourself", they did a live interview on the news. At the end of it, Cleveland would spontaneously and nonchalantly state "Obama doesn't care about black people.", a reference to a similar comment by the controversial life rapper Kanye West, which literally broke the internet.

After hearing the comment Cleveland made, Obama flew his helicopter to his house and paid him a personal visit. He revealed that all of Cleveland's stories of him in the past were completely false, as it was himself, who always beat Cleveland at basketball. Obama thought the proper way to settle the score was to get into one final basketball competition with him. Without struggle, Obama beat Cleveland and embarrassed him in front of his family and the rest of the entire neighborhood. After asserting his dominance, both on the field, and in the states, Obama got back into his helicopter and flew away.

In a deleted scene from "Fat and Wet", a cutaway gag featured Barack Obama sitting at his podium, flanked by Joe Biden and Nancy Pelosi, and dressed as a dragon. Obama was stating before all of America that he was, in fact, a dragon. Meaning that if anybody ever sees any smoke coming from him, that's just his breath and not his smoking addiction. Obama proceeded to smoke a cigarette and blow the smoke through the nostrils of his dragon costume.

In "Menace to Secret Society", Lester damned Obama, when he unwillingly got a job as an ostrich delivery man, blaming him for getting a job he did not like.

Barack Obama is modeled nicely after his real-life counterpart. He is a tall, African-American man with fuzzy black hair and a deep voice. He wears a black suit, white shirt, blue tie, black pants, and black shoes. They even included the mole on his face, by the side of his nose.

Barack Obama is portrayed like a general Obama archetype, but he has come equipped with heightened athleticism and phenomenal basketball playing skills. He is also a dispenser of many puns and word-play-based insults toward his inferior opponents. 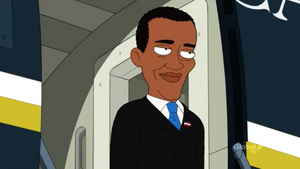 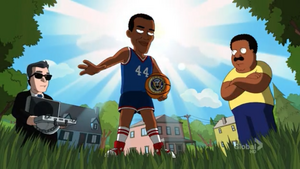 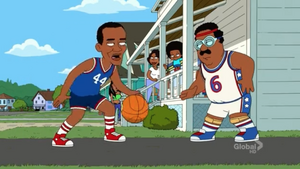 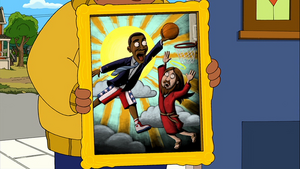 Obama's basketball picture in "You're the Best Man, Cleveland Brown". 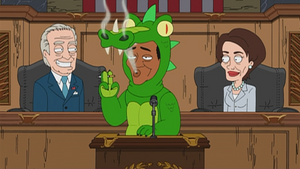 Obama concealing his smoking addiction in a deleted scene from the episode "Fat and Wet".