Baramos is the villain who terrorizes the Overworld in Dragon Quest III, a world that bears a striking resemblance to Earth.

When Ortega, the Hero's father, is seemingly killed by a dragon, his child must finish what he started. After visiting the King of Aliahan, they set out on a quest to defeat the Archfiend. After gathering the six Orbs and awakening Ramia, they go into Baramos's castle to fight the Archfiend. After a threat about eating Erdrick's innards, the two fight for the fate of Aliahan, with the Hero triumphant. Baramos is slain and the King of Aliahan throws a celebration, seemingly marking the end of the game. However, Zoma announces that Baramos was an underling and announces his intentions to throw Aliahan into darkness, just as he did with Alefgard, forcing the hero to continue their quest.

Baramos appears as one of the legacy bosses in Dragon Quest IX, his map can be obtained by completing the quest "Brian's Dyin' Wish". 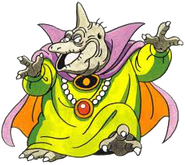 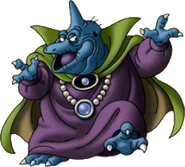 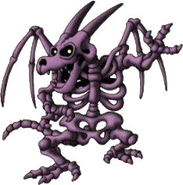 Retrieved from "https://villains.fandom.com/wiki/Baramos?oldid=3724132"
Community content is available under CC-BY-SA unless otherwise noted.