Minister of Trade and Foreign Affairs of the United Kingdom

Smoking cigarettes. (This is a habit her body double lacks.)

Stay away from potential assassination. (failed)

She was a New Zealand tycoon and Ex-Minister of Trade and Foreign Affairs who was forced to resign after she was found to be funnelling charity donations into her offshore accounts.

Barbara Johnson was raised from a modest working-class English background. Her father, Samuel Johnson, was a waiter at an expensive restaurant and unlike rest of the fathers in the neighborhood, who wore overalls and worked on a factory line. Despite their middle-class upbringing, Barbara was proud of her parents and sees them as unique ones.

At the age of 18, Barbara caught the eye of a visiting business man, Robert Keating, who was 25 years older than her and based halfway around the world in New Zealand. They married a few years later. However, after Keating died of a heart attack in bed, Barbara sidelined Keating's family and took control of her late husband's business interests, eventually building a business empire. She often left a fair bit of wreckage in her slipstream.

Much later, she made a foray into politics and was eventually appointed Minister of Trade and Foreign Affairs in her adopted homeland, before being given the honorary title Dame Barbara by the Queen. At the height of her powers, however, Barbara became engulfed in a scandal and was forced to step down from her post. A charity she represented benefitting the homeless was found to have funneled donations into Dame Barbara's own offshore holdings.

To minimize the damage to herself, Barbara drew on tabloid contacts and orchestrated an elaborate smear campaign against the director of the charity, Jacqueline Vicar, a renowned but fragile poet and social organizer. The director was depicted as a blackmailer and conspirator, who aimed to entrap Dame Barbara in a scheme to pay off the mounting costs of Vicar's own private vices. Nevertheless, the director was killed in a conspicuously timed car accident not long after, offically (and publicly) considered a suicide.

Now a somewhat more paranoid (and significantly more cautious) Dame Barbara is preparing for her political comeback, with help from an uncanny body double. She was later assassinated by Agent 47, who had differentiated her from her body double through the difference of their living habits. 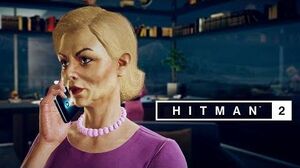