Leader of the Independent National Party

General of the Parthevia Empire (formely)

Destroy the Sindria Kingdom and the inferior people of the Parthevian race (failed).

Barbarossa is the main antagonist of the prequel spinoff series, Magi: Adventure of Sinbad. He is a member of the Dragul Family, the general of the Parthevia Empire, one of the many King Vessels of Judar and the older brother of Drakon.

His initial goal was to marry Princess Serendine Dikumenowlz Du Parthevia so that he can take the throne and become Parthevia's emperor, but following her departure from the empire, along with his brother and her two maidens, Barbarbossa initiated a coup d'etat, ceasing the conflict of war with the Parthevia Empire. Barbarossa later retired from his military service and entered in politics, in which he formed the Independent National Party. From here on, he planned to make his party as the political party in power, so that he can develop a new political system, based on his ideologies of a superior race.

Barbarossa is depicted as a sophisticated man with short, green hair and wears an earring similar to his brother's, except he wears his on his right ear. He is usually depicted with shadowy eyes underneath his bangs and red pupils. He is normally seen in his armor that he wears during his military career, consisting of metal plated armory on his arms, legs and body and robes that sit on his right shoulder.

When he becomes the newly elected president of the Parthevia Empire, he wears an entirely different outfit. This outfit is mainly white, fitted with a white cape and golden accents and jewelry around.

Barbarossa initially presented himself as a cold and calculating man that cares very little for others. He does not care for his brother, Drakon, one bit, viewing him as a disgrace to their family name and went as far as to demote his rank and proclaim he was dead, due to his failures. He originally acted kind and protective to Serendine, but when it became clear that she refused to continue to the marriage with him after he had attempted to kill his brother, he did not hesitate to tell her his father passed away and forcefully proclaim that she will be his queen. Nonetheless, he holds respect of Judar, as Judar is his Magi and apologizes for disturbing him in his sleep.

As time passes on, Barbarossa meets with Sinbad and reveals more about himself. Barbarossa acted friendly towards him, as he admires and holds great respect over Sinbad's accomplishments. He even went as far as to cancel all important meetings he had and spent time with him, in order to prove to him that he was a man he could trust and develop a genuine friendship with each other.

However, during these interactions, Barbarossa reveals his ideologies, which conflicts with Sinbad's. Barbarossa believes that the Parthevian race are the superior race in the world and that he aims to cleanse the world by ridding the "inferior" beings through massacre. Barbarossa goes as far as to say that Sinbad only came this far because he is a Parthevian, making him a superior being.

When Sinbad (under the control of Serendine) declares war against the Parthevia Empire, Barbarossa did not hesitate and instead prepared to launch his assault on the people of the Sindria Kingdom. Barbarossa has shown that he can also be very perceptive and well prepared as he knew beforehand that Sinbad was under a mind control, but chose to start war regardless, as he believed those that can be easily manipulated by others are deemed inferior and such power could pose a threat to him.

However, at this point, Barbarossa slowly falls into despair when his forces begin to lose the war. He eventually becomes a broken man backed into a corner as he lost the trust of his people and is deemed a failure in their eyes, ultimately destroying everything he's built. As a result, he goes from a man filled with ambition to a man filled with rage and distress.

Being a King Vessel under Judar, Barbarossa is a Dungeon Capturer, having cleared and captured two dungeons and taking possession of the Djinn in those same dungeons. Both of them reside in his Metal Vessel, which is that of a golden poleaxe. Him possessing more than one Djinn alone showcases how powerful and skilled Barbarossa truly is, while the Djinn themselves grant him incredible power that he makes effective use with. 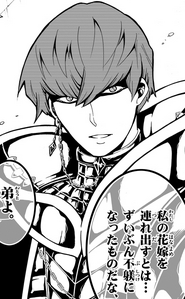 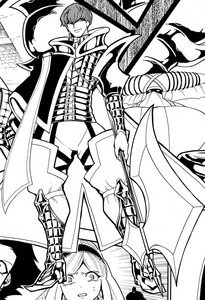 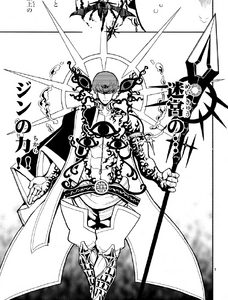 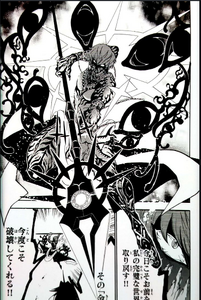 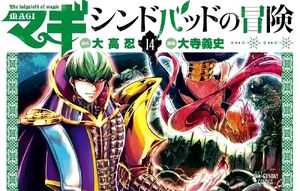 Barbarossa on the cover of Volume 14. 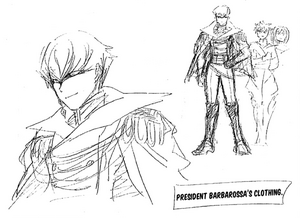