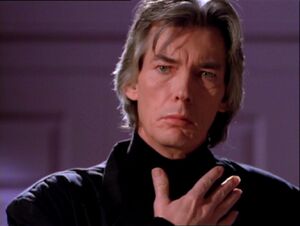 Barbas is the demon of fear and a recurring antagonist of Charmed.

He was portrayed by the late Billy Drago, who also portrayed John Bly in The Adventures of Brisco County Jr., Frank Nitti in The Untouchables, and Ramon Cota in Delta Force 2: The Colombian Connection.

Barbas has the power to see a person's greatest fear and turn it against them, which literally scares them to death (however, in later appearances, he used this power to manipulate his victims rather than simply kill them). His name is taken from Barbas, the Great President of Hell in Judeo-Christian demonology.

He appears on Earth once every 1,300 years on Friday the 13th for 24 hours. His appearance is attributed to the universal convergence of negative energies as derived from astrological charts. He derives his life force by feeding off the fears of witches. If he can kill 13 unmarried female witches before the stroke of midnight on Friday the 13th he will be able to break free from his eternal bonds and walk the earth for eternity. However, this rule changed as the character made return appearances since his return from being banished by the sisters.

One way to defeat Barbas is to overcome one's greatest fear. However, ways to vanquish Barbas are limited. Barbas has only been vanquished twice; first by Cole in Season 5, using the powers that he took from the Demonic Wasteland, and then by the Charmed Ones in Season 7, who by this time were proficient enough in potion-making to vanquish him.

He makes his first appearance at the mark of 12 on Friday the 13th. His plan is to kill 13 unmarried witches before midnight or else he will stay trapped in the underworld. If he succeeds, he will be allowed to wreak havoc on the world, every single day. Prue Halliwell believes she vanquishes him by overcoming her fear, and does defeat him, but it is later revealed his upper level powers allow him to stop in a limbo plane of existence, well short of the vanquishment plane later shown after the Charmed Ones vanquish Cole Turner as the end of his first office as Source of All Evil (Charmed (season 5)).

It is another Friday the 13th, and Barbas somehow manages to return, angry at the sisters for previously having vanquished him. He hires Bane Jessup and Ms. Hellfire, two assassins, to kill the sisters for him. Prue repels the bullets using her powers, killing Ms. Hellfire. Bane gets caught and ends up in jail. The sisters defeat Barbas again and put him back in purgatory.

Barbas returns again, and he manages to get into the sisters' house, where he implants their worst fears. All three of the sisters and Cole are affected and this causes a major shift in power when a great deal of power flows from Cole into Barbas. Paige eventually orbs a potion onto Barbas, stripping him of his stolen powers; Cole then vanquishes him with an energy ball. This is the first time Paige deals with Barbas.

Barbas returns, brought back from Purgatory as a lawyer of sorts, to prosecute the sisters' misuse of powers. However, he actually set up the sisters by possessing people with phantasms, in hopes that their use of magic would be exposed without their knowledge. In the end Barbas wins and Phoebe is temporarily stripped of her powers. Barbas thinks that without their powers, the sisters will be easier to kill. Barbas also discovers the Elder Gideon's worst fear.

Barbas approaches Gideon for a part in helping to destroy the Charmed Ones. Aware that Barbas knows his worst fear, Gideon agrees and Barbas distracts the sisters long enough for Gideon to get his hands on Piper's first-born child, Wyatt. The sisters then have to travel to a parallel dimension to make an agreement with their parallel but complimentary selves, where "Barbas" in that dimension exists as the "Demon of Hope" and is as equally powerful as his counterpart "Barbas: Demon of Fear". The evil Charmed Ones have to work a deal with their opposites to defeat the combined power and situation forced by the joint machinations of The Elder Gideon and Barbas— who ultimately have conflicting agendas, which the dualized-sisters' and dualized-Leos' exploit to force a defeat.

Barbas is being tracked by Leo for conspiring with Gideon. In this episode, he tries, yet again, to kill the sisters by infecting Piper and Leo with their worst fears. Although he manipulates Leo into killing an Elder, he fails yet again to kill the sisters as Phoebe and Paige are there to help them. Phoebe and Paige make a strong vanquishing potion, using it against Barbas. Before being vanquished, Barbas states that he will return again because "fear always comes back".

Barbas is a very powerful upper level demon, and having an "of" title implies he's one of the more powerful ones. He has the power to: