Attempted attack upon the Carne Village

Barbro Andrean Ield Ryle Vaiself is a minor antagonist in Overlord and was the power hungry Crown Prince of the Re-Estize Kingdom. He was the eldest son of King Ramposa III, and older half-brother of Second Prince Zanac and Third Princess Rener. He and his half-brother competed in a bitter rivalry for the throne.

Although standing at the side of Human Kingdoms that opposed Ainz Ooal Gown and the forces from the Great Tomb of Nazarick, Barbro is by no means a heroic character because of his abuse of power, his arrogance, his hunger over power and his cold-blooded tendency towards people in his Kingdom and his allies.

His attempt at attacking Carne Village, a human village under the protection of Ainz, has cemented his status as a villainous character who would do anything in order to gain power for himself and become the King, even at the cost of weak people.

He was voiced by Taiten Kusunoki in Japanese version, and by Newton Pittman in English version, the latter who voiced Twice.

Barbro was an extremely arrogant, jealous and power hungry individual, who used his cruelty to hide an incompetent and bullying coward. was completely self-centred and cruel to everyone around him, even allies. Even so, he didn't show his arrogance publicly in order to maintain a facade.

Barbro believed himself to be a natural leader and that the people of the kingdom should throw themselves into service as part of his divine right. However, his sheltered life and lack of military experience means that his martial skill were nowhere as vaunted as he believed. Much of his thinking is driven by a thirst for prestige. He takes actions that he thinks will further his political standing, just as many of the political players in E-Rantel will do. Although, he is very poor about considering the fallout of his actions or consideration for others.

Like his half-sister, Barbro held no loyalty except towards himself. He was even willing to lie and kill anyone including his own family. All he wanted to do was merely sitting upon the throne of his kingdom and planned on purging the nobility that supported him once he's King.

The Magic Caster of Destroy Arc

Barbro's position was weakening due to the demon incident of the Royal Capital. This was because the Crown Prince chose to remain in the castle rather than confront the demons attacking the royal capital. As a result, the incident made him look like a coward.

Eager to prove himself in the Kingdom's war against Nazarick, Barbro tried to join the annual war, but was instead sent to Carne Village by his father to gather information. However, instead of obeying his father, Barbro blindly chose to interrogate the villagers and attack them.

Barbro sent word to Carne Village that Ainz Ooal Gown had been deemed a sworn enemy of the Kingdom, which angered the villagers and caused them to rebel against Barbro. The talks with the villagers turned violent, and Barbro lost his temper and threatened them. However, Barbro's army was eventually repelled when Enri's newly summoned Goblin Army came to the defense of the village.

Horrified at the Goblins' brutality, Barbro and his remaining troops retreated to the plains, only to be ambushed by Lupusregina Beta. Originally, Barbro tried to threaten Lupusregina with his position as the Crown Prince, but it was useless. Revealing her sadism in front of the Crown Prince, Lupusregina summoned her own Goblin Army, which effortlessly slaughtered the rest of Barbro's forces.

Shocked once more by a group of Goblins' attack, Barbro was reduced to a whining coward. He desperately attempted to bargain for his life, telling Lupusregina that he would be useful to Ainz as a political prisoner. However, Lupusregina ignored Barbro's pleadge. Instead, she gleefully tortured him for half an hour before leaving him to die. 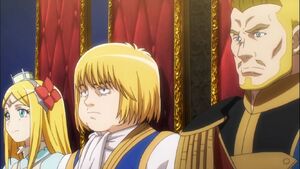 Barbro with his siblings 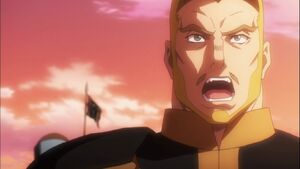 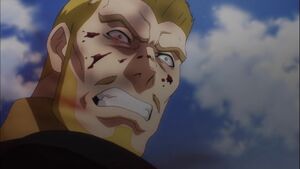 Barbro watching his army taken down by Goblins 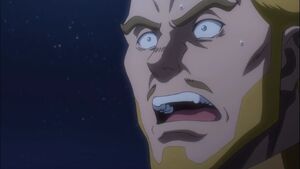 Barbro shocked at the death of his remaining soldiers 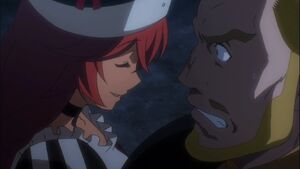 Barbro's final moments before Lupusregina prepared to torture him, leading to his death
Add a photo to this gallery

Retrieved from "https://villains.fandom.com/wiki/Barbro_Andrean_Ield_Ryle_Vaiself?oldid=4195931"
Community content is available under CC-BY-SA unless otherwise noted.