He is a greedy, arrogant and manipulative aristocrat who is bent on getting married to women in order to kill them, so he would be able to gain their fortune and wealth. He once killed a wealthy young woman he claimed to love and years after committing such deed, is bent on repeating it again with another victim.

He was voiced by Richard E. Grant, who also played Withnail in Withnail & I, the Great Intelligence in Doctor Who, Vic Van Wrinkle in Horrid Henry: The Movie, The Man with Beard but No Hair in A Series of Unfortunate Events, Dr. Zander Rice in Logan and General Pryde in Star Wars: Episode IX - The Rise of Skywalker.

Although he is the main antagonist, he doesn't reveal his true colors until near the climax. Lord Barkis Bittern is a wealthy newcomer of an unnamed European village. He attends and watches the wedding rehearsal between Victor Van Dort and Victoria Everglot which fails when the former doesn't perform well. Barkis criticizes him, as if he doesn't want Victor to marry her.

When Victor is abducted by Emily, Barkis tries to make it look like that he left with another woman at the night. Victoria's parents Finis and Maudeline decide to get Victoria to marry him instead due to his apparent wealth. He pursues the Everglots to make Victoria marry him and afterwards, reveals his true plan to steal the dowry after the ceremony and to murder Victoria after that. Later, after the undead shows up, Barkis tries to flee with Victoria along with her money. However, as he discovered, her parents were actually broke, and that they were marrying Victoria to him for wealth that he didn't actually have.

He shows up in the church attempting to get Victoria back, as she was his wife. Emily recognizes Barkis as the man who left her waiting in a tree, so that he could kill her and get her family jewels and a satchel of gold that was her dowry. He attempts to take Victoria hostage and planning to kill her just like what he did to Emily, but Victor stops him, and he attacks him with a sword plucked from Bonesapart's ribcage. After a fight, with Victor mainly just defending himself with a fork and Barkis trying to kill him, Victor fell to the ground and Barkis nearly killed him.

Emily intercepts the sword and orders Barkis out of the church, but he realizes that the undead must obey the living. However, he unknowingly drinks the poisoned wine, while insulting Emily because of her death and mocking her because he was very alive, accidentally killing himself. Turning into a zombie, this left him vulnerable to the wedding's attendants, and allowing the vengeful undead to drag him off to the underworld as he pays the price for what he did to Emily.

Barkis Bittern is a cowardly, wicked, sarcastic, greedy and treacherous man who always has his eye on an evil plan to get whatever he wants, even if he has to fight for it. He is incredibly selfish and egotistical, as he murders for a fortune only for himself while tricking rich young women to fall in love with him. He is known for being extremely deceiving and manipulative, as he manipulated Emily and killed her only then to try to do the same with Victoria only to be stopped. One of his most loathsome plans is when he cons and murders the rich of their dowry.

Barkis Bittern is a slender man with a large chin, white slick hair, and wears a black cutaway with white collar pushed upside and a bow tie, also gray pants and black shoes. 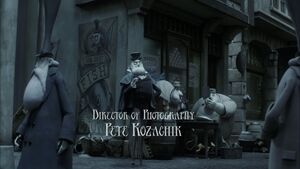 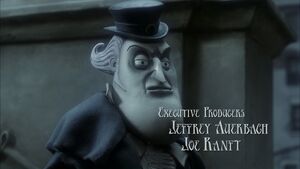 Lord Barkis hearing the announcement of a wedding rehearsal. 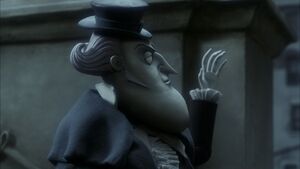 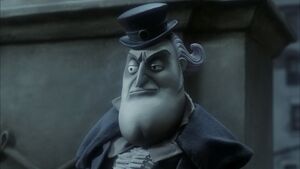 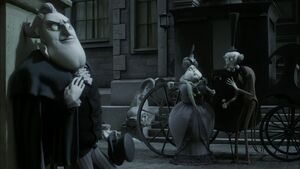 Lord Barkis eavesdropping on the Van Dort's plans to have their son marry into the aristocrat Everglot family. 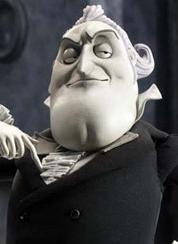 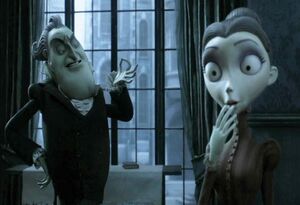 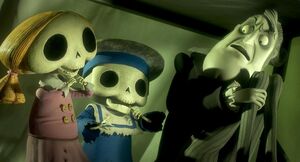 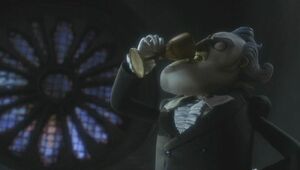 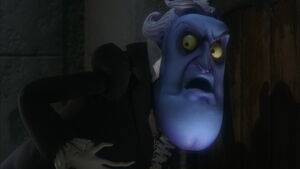 Barkis already dead and as a zombie after drinking the poisonous wine. 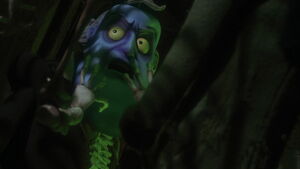 Barkis's final moments, horrified as he gets dragged to the underworld by the undead. 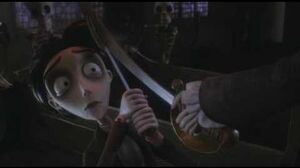