Barney Rubble is a character in the Robot Chicken sketch, "Cereal Killer". He is depicted as an impulsive murderer.

He was voiced by Stephen Stanton and Dave Coulier.

Fred and Barney were just relaxing at home watching TV, when Fred hears someone knocking at the door. Fred answers the door where there's a FedEx-stone mailman who offers Fred a delivery package from "Amazonaboulder.com/pebble". Fred reads the letter which is from Barney and it reads "Dear Fred, I hope this distracted you long enough. Signed, Barney. P.S.: I invented paper! Bitchin'!" Then Fred looks back and sees Barney getting a hold of his Fruity Pebbles, since that letter was used to distract him. Fred shouts "Barney! My Pebbles!" and chases him around the room and beats him down. Barney then knocks him out with a club. Barney tries to have a good laugh with Fred, but is shocked to see that the club he hit him with killed him.

Barney later buries Fred's corpse in tears with a bird hoe in tears saying he "just wanted some of his f**king cereal". Then the bird hoe comes alive and comments "Well, [Fred's] head always was full of rocks." Barney is shocked to see that the bird shovel is a witness, and then snaps his body killing him. Then he barges into the house to confront other witnesses: the dishwasher (an octopus), the record player (a pteranodon), and the bidet (a turtle). And then he starts killing every single animal appliance that's considered a witness to his murder, and then laughs maniacally. Then Wilma and Betty arrive in the house, and are in shock to see Barney killing almost every animal there. Later Barney, presumably put on trial, was sentenced to be executed by hanging.

While Fred was at the hospital after years of smoking while advertising cigarettes, Barney comes in and makes fun of Fred over his "robot voice", causing Fred to call him an a**hole in disgust. Barney tries to cheer him up by giving him another flavorful cigarette. But when he was about to light the cigarette, Fred tries to warn Barney to put out the flame since he's "standing next to pure oxygen", but then they both blow up. 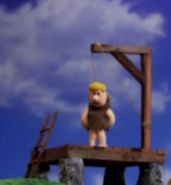