Complete control of the Gundalian army

Destroying all those who gets in his way.

Acquire the power of the Sacred Orb (succeeded).

Later, he and Dharak were imprisoned by Code Eve when they refused to accept defeat and were transformed into the beings called Mag Mel and Razenoid. Barodius is also the arch-nemesis of Dan Kuso.

He was voiced by Shawn Meunier.

Emperor Barodius is an intelligent and powerful Gundalian. He is also the former emperor of the Gundalian empire. Being the most powerful brawler in the universe, he easily defeated his opponents.

Although Barodius is cunning and resourceful, he is also very ruthless, sadistic, power-hungry, egocentric, cruel, conniving, manipulative and devious. In this point, he also manipulates the other members of the Twelve Orders into doing his dirty work. He will also stop at nothing of getting off what he desired. Barodius is also very narcissistic and uncaring as he considers his own allies and soldiers expendable and cares nothing for their lives and only views them as pawns; as he disposes of them when they are no longer useful or sacrificing them in order to gain more power or to eliminate a strong opponent in his way. The one exception being Kazarina, as he was angered by her death and avenged her by destroying Gil's ship and him along with it. He also told Dharak to destroy his enemies in her name.

As Mag Mel, Barodius is more ruthless and power-hungry than before. He does not care of his subordinates Anubias and Stella like before as he absorbed them to take their powers. He fears of Dan's remained power the gate and key. He is believes Titanium Dragonoid evolved into Fusion Dragonoid is futile and nothing to stop him and Razenoid. He shown his anger toward Dan and Drago when they called him and Razenoid by their original names. After his defeat by Dan once again, Barodius is also suicidal as he attempted killed both Dan and Drago by using the uncontrollable energy to exploded himself. 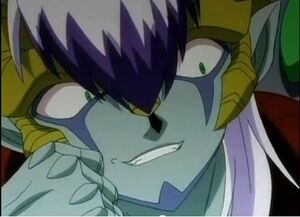 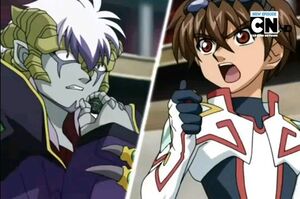 Barodius and Dan Kuso ready for their final battle.
Add a photo to this gallery

Retrieved from "https://villains.fandom.com/wiki/Barodius?oldid=3288091"
Community content is available under CC-BY-SA unless otherwise noted.