Destroy Oblivion Island and build a new one (failed).

The Baron is the main antagonist of the 2009 computer-animated anime film Oblivion Island: Haruka and the Magic Mirror. He is the aristocratic tyrant of the world of neglected called Oblivion Island.

He was voiced by the late Iemasa Kayumi in the Japanese version, and by Patrick Seitz in the English dubbed version, the latter of which is best known for voicing Dio Brando in JoJo's Bizarre Adventure and Scorpion in Mortal Kombat.

The Baron is the aristocratic leader of Oblivion Island, an island of fox/pig-like creatures that build their home around items neglected by humanity. But the Baron himself is tired of taking things just forgotten and seeks to steal everything from the humans, for he sees himself superior to both his race and the humans.

When Teo accidentally brings Haruka into their world after obtaining her mother's mirror, the Baron obtains the mirror when Teo dropped it, but it was stolen by the Petitloss. From an oracle underling does the Baron discover that Haruka is a human. One night while fetching water, the Baron's minions abduct Teo for the Baron to meet him in private. He manipulates Teo that the mirror Haruka seeks is actually his, and tells him that if he brings both the mirror and Haruka to him from the Petitloss' lair, he will be both pardoned for his crime of smuggling a human and rewarded ten thousand stamp cards. Teo unwillingly accepts the Baron's offer.

Haruka and Teo soon obtain the mirror from the Petitloss and upon returning the surface from their lair through a well, they are ambushed by the Baron's men. He grabs Haruka and the mirror, complementing Teo for succeeding in his bargain and gives him ten thousand stamp cards as promised. Cotton attacks the Baron demanding Haruka to be released, only to be thrown down the well. Teo asks the Baron to at least return Haruka back to the human world, but the Baron reveals that he instead wants to make her his servant and reminds Teo that her fate had nothing to do with their agreement. The Baron then takes off with the mirror and Haruka on his airship, leaving Teo upset about his decision to betray his friend.

In his castle, the Baron shows Haruka a large contraption he created using ten thousand mirrors that he stole, using her mirror as the main source. He reveals to her his plan of using his machine to bring life to a horde of robots to steal everything from the human world so the Baron can dispose of the old island of forgotten things and replace it with a new island of enhanced machinery. Thus he can be seen as more luxurious than humans. He tells his guards to make Haruka swallow an oblivion drop so she will forget her memories and become his human slave.

Fortunately, Haruka is able to escape when the Baron's castle is knocked from an explosion by Cotton leading the Petitloss to reclaim their stolen mirrors. The Baron activates the mirror machine to activate his robots in capturing Haruka, cornering her on the edge of his castle. As he uses his airship to capture Haruka, Cotton finds his way on the airship and attacks the Baron. But the Baron easily defeats the toy lamb and rips him in half before throwing him off the airship. Haruka dives down after Cotton and is rescued by Teo piloting a plane. The Baron orders his men to fire at the plane, only for Teo to crash his plane into the Baron's airship, which in turn causes the airship to crash into the machine.

Inside the mirror, Haruka sees memories of her family and accepts her mother's death. Suddenly, the Baron chases after them as the machine starts to break apart. They jump through the glass of the mirror, but the Baron himself gets stuck. He tries to shoot them, but misses and instead hits the machine, causing a chain reaction that destroys his castle. Teo snatches the mirror from underneath the Baron, who has gone hysterical for his mirrors. Once the dust has cleared, the Baron underneath his cloak and mask is revealed to be a green pig-man. Half naked and completely powerless, he runs away.

The Baron wears a royal white robe and a green tie. He has a white mask with a mustache, small red lips, and a cylinder-shaped crown decorated with bells on it. His limbs are long and end with small hands and legs covered in black rubber. All that is seen of his underside are his lime green eyes, with his upper eyelids painted pink.

As he loses his clothing through the movie, his true identity is revealed to be a fat green humanoid with a face resembling a pig.

The Baron has a nonchalant personality, acting calm but will grow aggravated when something doesn't go his way. A greedy and sophisticated aristocrat, the Baron is highly manipulative, as he convinces Teo to bring him the mirror and Haruka in exchange for ten thousand stamp cards. Ultimately, the Baron is shown to care about nobody but himself as he plasters his own image on the walls of his castle and the front of his airship. He hates the tradition of collecting old and neglectful things in favor of everything so he can be seen as more beautiful than the humans. He also despises the Petitloss and other sentient toys and will even resort to murder as seen when he remorselessly tears Cotton in half in front of Haruka.

He also has a huge fascination with mirrors; it is later revealed this was part of his plan to activate an army of robots so he could steal from the human world and build a larger, more grand island for him to rule. When Haruka and Teo attempt to obtain the mirror, the Baron goes crazy and resorts to attempting to kill them simply for interfering. Once his contraption starts collapsing, the Baron becomes even crazier with the beauty of his mirrors and gazes at their marvel instead of saving his life.

But once he is reduced to his true pig-like appearance, the Baron is shown to be a coward and quickly runs away in shame when his minions were unable to recognize him. 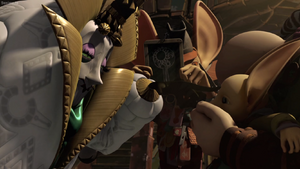 The Baron manipulating Tao into giving him Haruka. 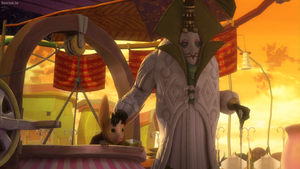 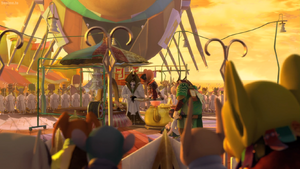 The Baron rewarding Tao with Stamp Cards for bringing Haruka to him. 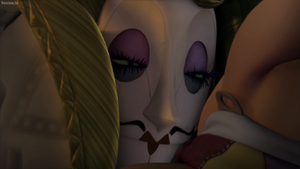 The Baron telling Tao that Haruka's fate was not part of their agreement. 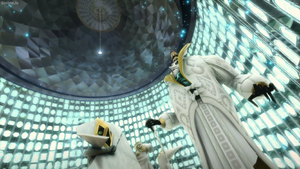 The Baron showing his machine to Haruka. 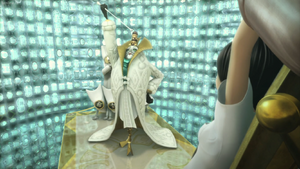 The Baron reveals his plans to be superior to the humans. 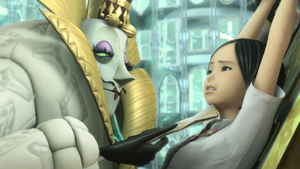 The Baron telling Haruka how he plans to turn her into his slave. 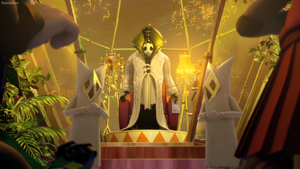 The Baron informed by his men that Haruka escaped. 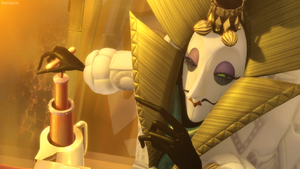 The Baron pushes a switch to activate his machine. 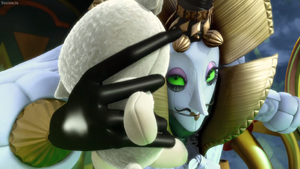 The Baron squeezing Cotton when he tries to prevent him from harming Haruka. 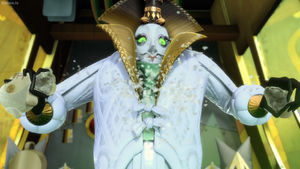 The Baron ripping Cotton in half. 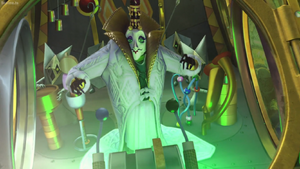 The Baron shocked to see Tao's plan coming straight for his airship. 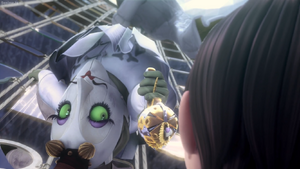 The Baron points his gun at Haruka. 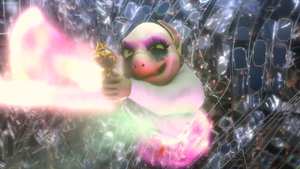 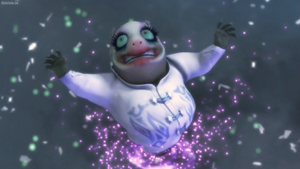 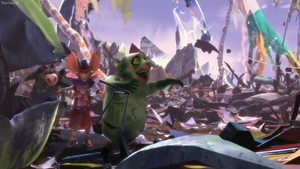 The Baron runs away in defeat.
Community content is available under CC-BY-SA unless otherwise noted.
Advertisement