Get Eugene back on thefts.

Force Eugene to marry Stalyan.
To get revenge on Eugene and Rapunzel (all failed).

The Baron is the secondary antagonist of the Disney television series Tangled: The Series. He is the unseen overarching antagonist of "The Return of Strongbow" and "Big Brothers of Corona", and the main antagonist of "Beyond the Corona Walls" and "Flynnposter". He is a notorious kingpin that has a history with Flynn Rider and Lance Strongbow, serving as their arch-nemesis.

He was voiced by Lance Henriksen, who also portrayed Lockdown in Transformers Animated, General Shepherd in Call of Duty: Modern Warfare 2, Karl Bishop Weyland in the 2010 Aliens vs Predator video game, The Stranger in When A Stranger Calls, Emil Fouchon in Hard Target, Grim Reaper in The Avengers: Earth's Mightiest Heroes, Thomas Magruder in the Gun video games, Sergeant Daniel Neff in Damien: The Omen 2, Lieutenant in The Legend of Korra, John Milton in Scream 3 and Dr. Jarret in Man's Best Friend.

The Baron is a treacherous, mysterious, fearsome, vengeful, murderous, sadistic and authoritative crime boss. Despite his negative traits to Flynn and Lance, he genuinely loves his daughter Stalyan, he will do everything she wants, even forcing Flynn Rider to marry her if she desired it.

The Baron rules the city of Vardaros, residing in a luxurious castle with his daughter Stalyan. He is a deeply feared member of the criminal underworld and has allied himself with other thieves such as Anthony the Weasel, Flynn and Lance to carry out his bidding throughout regions beyond Vardaros itself. The Baron, however, does not appear to partake in actual operations on the field. He instead spends a majority of his time at his castle, feeding his swans and wallowing in luxury.

It was told that years ago, he agreed to have Stalyan marry Flynn because of their partnership while assigning Flynn and the Stabbington Brothers to steal the princess crown of Corona for a fortune. However, Flynn grew tired of Stalyan's controlling nature and rejected the proposal by refusing to show up at the altar; even Lance and the Stabbington Brothers tagged along as well. This left Stalyan enraged, and ever since then, the Baron furiously vows to make Flynn pay for this by any means necessary.

The Baron is first mentioned in "The Return of Strongbow" where, eight years in the past, Anthony betrays Flynn and Lance during a royal caravan robbery. As he makes off with the goods, Weasel notes that his actions were under the Baron's orders. Eight years later, Lance ropes Flynn (who reverts back to his original name Eugene) into robbing the Baron's treasury, which they accomplished.

In "Big Brothers of Corona", the Baron sends Weasel and his goons to find and capture two young thieves who crossed him. The thieves, who turn out to be young girls named Angry and Red, plan to steal from Corona so they may use the money to pay for travel expenses to escape the Baron's clutches. Unfortunately, Anthony finds them, though Eugene and Lance turned themselves in exchange for the girls' freedom, knowing the Baron would much prefer the heads of his two most hated adversaries. Anthony accepts, but before he can make the delivery, he and his men are defeated by Angry and Red.

In "Beyond the Corona Walls", Eugene and his friends make a stop in Vardaros during their travels for resupply. Word of Eugene's arrival quickly reaches the Baron, who orders his goons to capture Eugene so to settle their feud. Eugene, Lance and Shorty are taken to the Baron's castle, where the former is interrogated by a bitter Stalyan, who reveals to still have feelings for Eugene. This prompts the Baron to make a proposition to Eugene: he must keep good to his original promise and marry Stalyan, or he, Lance and Shorty will die. To get his point across, the Baron unleashes his Kai spider upon Lance and bites him under his clothes. With no other choice, Eugene agrees to marry Stalyan in exchange for the antidote from the Baron as a wedding present.

During the ceremony, the wedding is crashed by Eugene's girlfriend, Princess Rapunzel of Corona, who brought in Maximus, Pascal, Hook Foot and Cassandra (the daughter of Mother Gothel) to fight against the Baron's henchmen. Furious, the Baron engages in battle with Eugene, and successfully pins the latter down. As the Baron prepares to unleash his Kai spider to kill Eugene, Shorty's clumsiness causes the spider to be startled and ends up biting the Baron instead. Fatally infected with the spider's venom, the Baron desperately searches for the anti-venom, but it had already been stolen by Pascal, who used it to cure Lance. Realizing now that he's doomed to succumb to the venom, the Baron furiously vows to kill Eugene before he dies, but he is knocked out with a frying pan by Rapunzel. As Anthony and the rest of the Baron's henchmen are forced to flee, Stalyan carries the Baron out from Vardaros, promising to settle things with Eugene and Rapunzel when she finds the antivenom to cure her father.

In "The Return of Captain Quaid", it was told that the Baron previously seized control of Vardaros from the incorruptible sheriff Captain Quaid, who was forced into retirement. Following the Baron's supposed departure, Anthony took control of Vardaros, but Rapunzel and the others helped Quaid into standing against Anthony and his men, forcing them to flee away from Vardaros for good. This resulted the Baron's criminal empire to fall, leaving Vardaros back under order.

In "Flynnpostor", it's revealed that the Baron has become disfigured by the venom and has failed to obtain the antivenom; even Stalyan decided to move on without him following the loss of his criminal empire. Being reduced to a hermit, the Baron is more determined to kill Eugene in revenge for making him lose his daughter and criminal empire.

When Eugene tries to track down a thief with a very similar appearance to him who took his old identity of Flynn Rider and stole Rapunzel's crown, the Baron takes this opportunity to capture Eugene, only to get the imposter (whose real name is Brock Thunderstrike) by mistake instead. Despite having got the crown to himself as he desired, the Baron stated that it didn't matter anymore as he is more determined to kill Brock; even discarding the crown to prove his point. Even when Eugene comes to the rescue by revealing himself, the Baron didn't care as he intends to leave both Eugene and Brock to drown. Rapunzel furiously confronted the Baron for refusing to move on over his losses, to which the Baron furiously replied that the reason why is because he's got nothing to move on to. The Baron attempts to crush Rapunzel with boulders, but Eugene and Brock freed themselves, and Brock uses Rapunzel's frying pan to knock the Baron out for good.

While allowing Brock to leave peacefully, Eugene and Rapunzel retrieved the crown and escorted the arrested Baron back to Corona, where Rapunzel's parents King Frederic and Queen Ariana sentenced the Baron to prison for life as punishment for his crimes. The Baron is last seen covering his disfigured face in shame while being locked up inside a prison cell by Eugene and Lance. 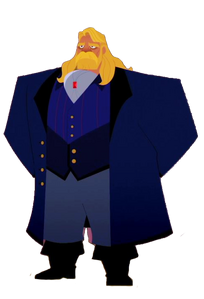 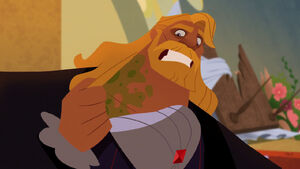 The Baron poisoned by his own spider's venom. 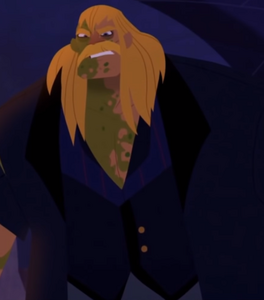 The Baron being disfigured by the venom after losing his control of Vardaros. 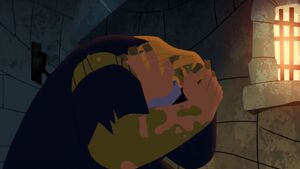 The Baron's defeat as he ends up being locked in prison. 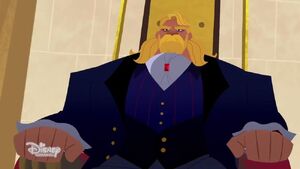 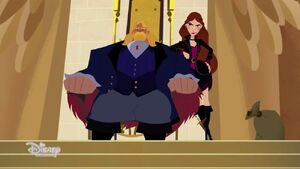 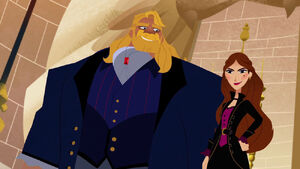 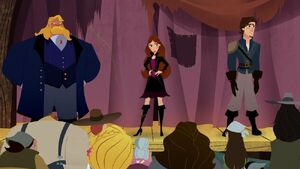 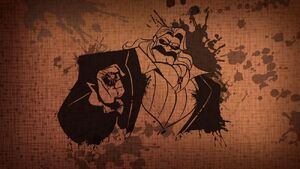 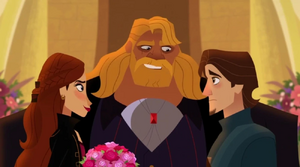 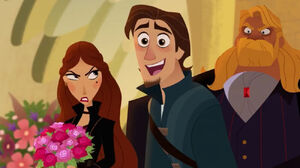 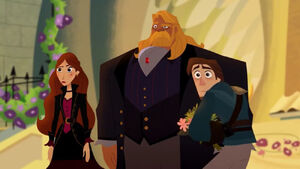 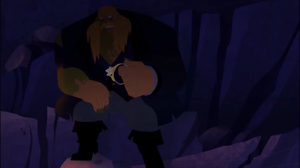 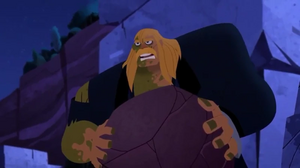 "When all of this is through, you're gonna wish he stayed with my Stalyan"