Kidnap all of the Gobbos (successful, later sabotaged).

Baron Dante is an evil dictator and the main antagonist of the Croc videogame franchise.

Croc: Legend of the Gobbos

Dante first appears attempting to capture all of the Gobbos on their home island, which he succeeds in doing. Shortly afterward, he noticed he left someone behind. That someone was Croc. In an attempt to defeat him, Baron Dante transforms various animals and plants into monsters with his magic. After failing to do so seven times, Baron Dante finally faces Croc himself.

He goes through several phases, the first two trying to crush Croc with his brute strength and the third using his lightening powers. Baron is not seen in the game after this, but a crystal version of him known as The Secret Sentinel is encountered as a secret final boss.

In the Croc 2 game, Baron was brought back from the N'th Dimension by his loyal Dantinis. After being revived, he planned to get revenge on Croc. After his minions failed to do so several times, Baron finally decided to confront Croc himself. He did so by standing on top of the mountain tops of the mountains above a Gobbo village. Croc shot him off using a Gobbo plane, and so he retreated to the Dungeon of Defright, where they would face off once more. Professor Gobbo created a portal to banish the evil being, but little did they know Baron had sent Crocs Parent's eggs into the Secret World. Fortunately for Croc, he was able to save these.

'He appears to have green skin, a green/red mohawk, a giant chin, red irises, an iron glove on one of his hands, steel armor for a shirt, purple tights, a red cape, and bear shoes.

In the first game, Baron is very determined to cause chaos in the land of the Gobbos. He puts them in cages that are laid out all over the land. Many of his symbols displayed throughout the game depict his face/body on them, implying some sort of egotism. Baron is willing to do whatever he wants to get his way, praying on innocent creatures and turning them into feral monsters. He went so far as to try and murder croc in order to stop him.

In the second game, Baron is very vengeful towards Croc for having foiled his plans. His goals now revolve around getting revenge, and doing so through any means necessary. One of his plots again involved kidnapping, having kidnapped Crocs future siblings and placed them in a secret world. 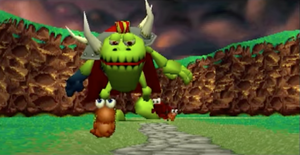 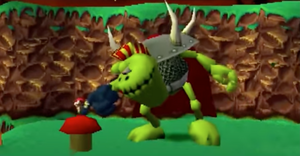 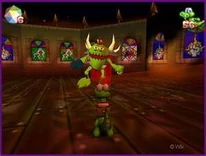 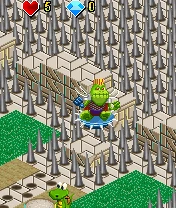 Baron in a mobile game. 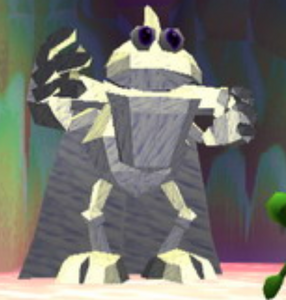 The Secret Sentinel, a boss that resembles Baron.