Baron Samedi is the main antagonist in the Grimm episode "The Waking Dead"  and the duel main antagonist in "Goodnight, Sweet Grimm". He also appears in "The Ungrateful Dead". He is based on the Loa of Haitian Voodoo religion of the same name.

He was portrayed by the late Reg E. Cathey.

Baron Samedi came to Portland, Oregon to make an army of the "undead." He was responsible for what the Portland police believed was people coming back from the dead. It turned out that he put his victims in a death-like trance. When he woges, he turns into a puffer fish-like Wesen called a Cracher-Mortel. He has the ability to spit a thick green liquid onto his victims which puts them into the trance.

He started out just attacking one person at a time, but then he got onto a city bus and spit his liquid on all of them. His "army" of "zombies" started to grow and he put them into a shipping container while he continues to get more people to build his army to unleash on Portland.

After putting his new group of zombies into the container, he goes to the hotel where Eric Renard is staying and they laugh and greet each other because of what they have planned for Portland.

The two dined, and the Baron gave Eric a display of his powers on one of Eric's bodyguards at Eric's request. That night he held a ritual and released several of his victims into Portland where they began causing havoc and devastation, thus to lure Nick to him. Following several clues, Nick, Monroe, Rosalee, and Juliette arrived, the Baron spotting them from the top of a shipping container (where he was keeping his victims) declared "let the games begin." He started releasing his victims who attacked the heroes. Nick and Monroe managed to take down a few but were overwhelmed and were forced to retreat. Nick drew them away so his friends could escape back to their car.

While escaping the zombies, Nick spotted the Baron on a shipping container laughing at him. Nick climbed up and gave chase to the Baron. Nick eventually catches up and the two entered a skirmish. The Baron uses his cane to fight. Nick tried to pull it away from him, only to reveal a sword inside it. The Baron held it up and attacked. Nick defended himself with the other piece of the Baron's cane. The two fight for a while until Nick knocks the sword out of the Baron's hand, and the Baron leg sweeps Nick knocking him on his back. The Baron opens the top of the container and Nick tackles him in. Once inside, the Baron slips away. Nick hearing only his laugh searches the container for him. Moments later after finding a coffin and a passport with an image of him, but someone else's name, the Baron ambushes him and spits on Nick, infecting him. He later waited for Eric to arrive to show him what he had done.

Later on the Prince's orders, he transported Nick to the Prince's private plane. Two security guards, having been told to ground the plane by Hank, tried to stop him, but he woged and spit on them, and took off. He was sitting on the plane enjoying a cigar and drink when Nick began to stir (being a Grimm meant the toxin affected him differently compared to humans and Wesen). He started breaking out of the coffin and the Baron reinfected him but this time it had no effect. Nick attacked the Baron and a fight broke out between the two. The Baron tried to regain control of Nick, demanding Nick to obey him. Nick paused briefly, but he snapped out of it and beat the Baron down. Their actions caused the plane to go down and Baron Samedi was killed in the crash. 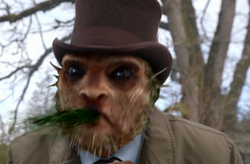 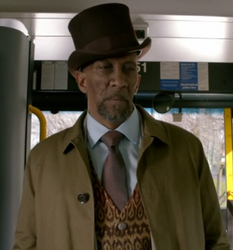 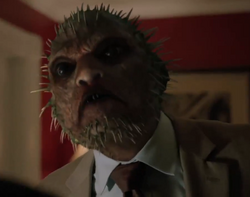 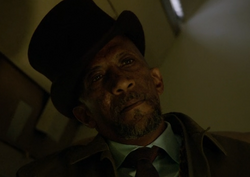 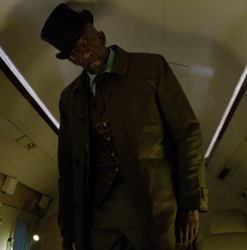 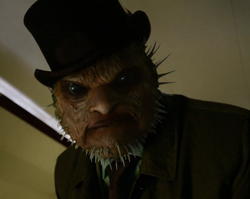 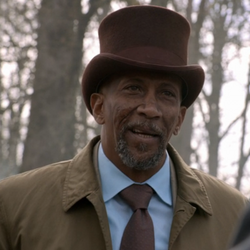 Add a photo to this gallery
Retrieved from "https://villains.fandom.com/wiki/Baron_Samedi_(Grimm)?oldid=3545408"
Community content is available under CC-BY-SA unless otherwise noted.