Game Boss
Baron Spider is an antagonist and the second boss in Ninja Gaiden II: The Dark Sword of Chaos.

Baron Spider was originally a scientist. He conducted research on irregular tarantulas. During his research, he was bitten by one of his tarantulas. As a result, he mutated into a deformed hybrid that was half-human and half-spider. The mutation also bestowed him with the abilities to control tarantulas and jump very high. With the new abilities, he renamed himself as Baron Spider. He was soon discovered by the evil emperor Ashtar. He became Ashtar's right-hand man.

Years later, Baron Spider was assigned to kill the young ninja Ryu Hayabusa. They encountered each other on top of a windy mountain and fought. Baron Spider attacked Ryu by jumping through the air while summoning tarantulas. Ryu fought back by using his sword. After an intense fight, Baron Spider was defeated. Before dying, he told Ryu what he is, who leads him and that Ryu's life is drawing near its end.

Baron Spider wears white clothes and black disfigured boots. He has black hair which is long and uncombed. Baron's hands are discolored. He wears a disfigured crown that is embedded with a green pearl. Baron's face is completely covered by a white emotionless mask.

Baron Spider's appearance is slightly different in the game's cut scenes. His entire body appears to be brown. He stills wears his mask but it is the same brown color as his body. His mask doesn't have a pearl. His hair is missing completely. This is the only time when Baron isn't surrounded by tarantulas.

During gameplay, Baron Spider looks completely different. His body is a bluish yellow color. His boots are still black but they are a regular shape. Baron's mask exposes his eyes but it covers the rest of his face. Instead of a crown, Baron wears what appears to be a helmet which is the same color as his body. Baron's hair is still missing. He also wears black arm bands.

Baron Spider's face is never revealed except in his concept drawings. 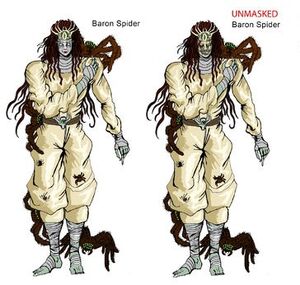 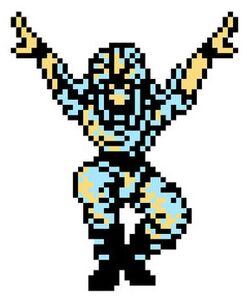 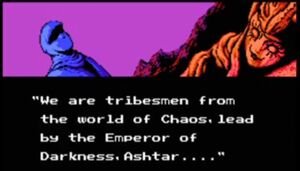 Baron Spider's last words
Add a photo to this gallery

Retrieved from "https://villains.fandom.com/wiki/Baron_Spider?oldid=3858794"
Community content is available under CC-BY-SA unless otherwise noted.