Take over the kingdom of Windemere.

The Baron may have seemed like a faithful advisor, but secretly, he felt entitled to the kingdom because it was his family who first claimed the Kingdom of Windemere centuries ago, before his great-great grandfather lost it during a game of rock-paper-scissors. He plans to create a potion that would give him super powers, allowing him to take down King Kristoff and take over the kingdom.

He was voiced by Michael Kopsa.

Even though the Baron was considered the most wise and insightful advisor, faithful and reliable, he was bitter because he felt like he could do a better job at ruling the kingdom. The Baron creates an elixir that will allow him to possess the power to destroy the King and seize the throne, but his pet frog Bruce, accidentally ruins it while trying to snatch a fly and the elixir spills down the drain. It drips onto a caterpillar, which glows and later transforms into a magic sparkly butterfly. Meanwhile, the Baron carries on assisting the royal family as usual. When the Baron is left alone in the throne room, he takes great satisfaction sitting in the throne, feeling like it suits him. However, Bruce suddenly appears and frightens him. The Baron threatens Bruce to find the new ingredients quickly, or he would have Bruce go back to the swamp he came from.

The Baron and Bruce manage to get the ingredients and they put them in a package, but the Baron witnesses Princess Kara using her magic powers in her Super Sparkle disguise. He is angry that she has powers that he is aiming for (which she got by being kissed by the same magic butterfly from earlier), but he only needs two more ingredients to give himself powers. While searching for them in a warehouse, the Baron and Bruce accidentally start a fire. They escape, but a man is trapped in the building, so Super Sparkle saves him. During Kara's birthday party, Princess Corinne finds out that Kara has super powers, so she finds the butterfly that kissed Kara and makes the butterfly kiss her, giving her powers. She begins going by the alias of "Dark Sparkle". The Baron is asked to find Kara.

Instead, he goes with Bruce to find the last ingredient for the potion: the root of the wild stagwort. When they rip it out of the ground, it breaks the earth beneath them and they fall. Super Sparkle saves them and recognizes him, but he does not recognize Kara in her disguise. Dark Sparkle arrives and accidentally causes more trouble, but Super Sparkle fixes it, making Dark Sparkle jealous. The two superheroes become rivals as the Baron continues his plan. The Baron doubles the ingredients to intensify the powers, and decides to get rid of Super Sparkle and Dark Sparkle along with the King. Wes Rivers, the editor-in-chief of What's Up Wes, pieces together evidence that Kara is Super Sparkle, and he makes it public knowledge. Kara's parents forbid her to act as Super Sparkle, and the Baron overhears the conversation.

With the elixir completed, he considers the timing perfect because Super Sparkle has had to retire. He drinks the potion, and gets the powers he desired. He reveals his powers when the royal family is having dinner, and he attacks the King. Kara and Corinne protect everyone with their powers, so Kara finds out Corinne is Dark Sparkle. They work together to try and stop the Baron as the rest of the family try to escape. Meanwhile, back in the lab, Bruce tries to catch a fly, but misses and licks some elixir by accident, and gets his own powers. Back in the castle, Dark Sparkle hits a statue and it falls and almost hits the family, so the Baron suggests Dark Sparkle join him. She opposes him. Bruce arrives to assist the Baron, and he congratulates the frog. Kara's parents tell her to stay with them in safety, but she defies them so she can stop the Baron.

As she goes to find him, Madison and Makayla encounter the Baron, and he sends Bruce after them. Parker and Newton attack the Baron but he easily fights them off. They find the butterfly trapped so they help the butterfly and also get powers. Super Sparkle and Dark Sparkle have too much trouble trying to work together so they stop. The family hides in an indestructible panic room in a tower. Super Sparkle flies at the Baron, but he grabs her by the cape. She takes off the cape and flies away. The Baron destroys the cape. Enraged, Super Sparkle blows more orbs at the Baron, but he dodges them. The Baron then purposefully causes Mount Dormant, a volcano, to erupt, and lava surrounds the tower. Super Sparkle saves them, and she gets help from Dark Sparkle to stop the Baron and stop lava from reaching the city. 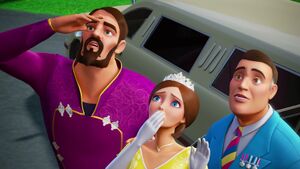 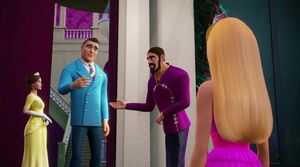 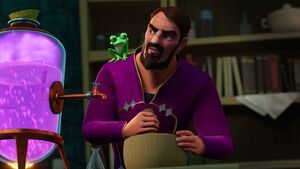 Baron with Bruce plotting in the lab. 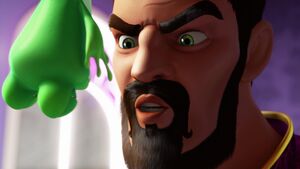 "Find what I need AND DO IT QUICKLY!" 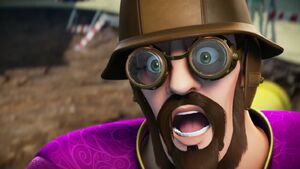 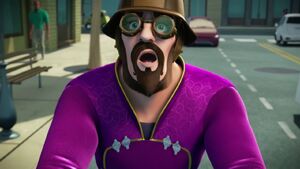 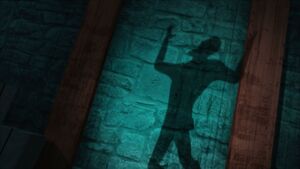 The Baron cackling evilly as he finally gets the power he sought. 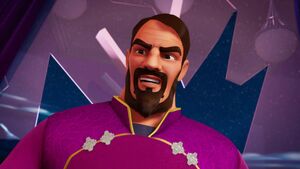 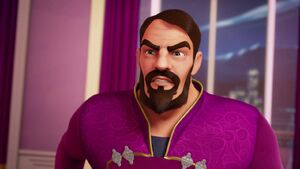 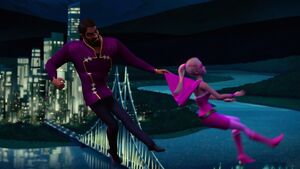 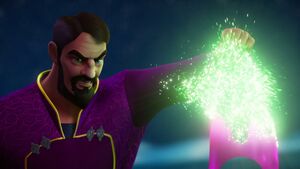 He incinerates the cape. 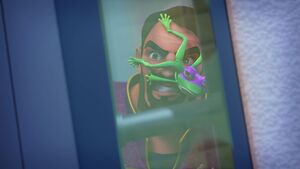 Baron and Bruce are locked up. 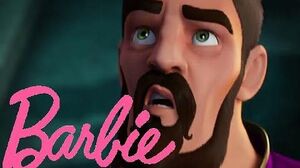 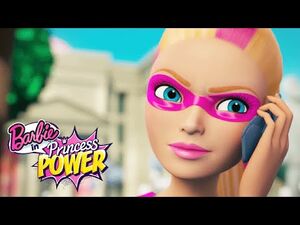