Running Motleyville with an iron claw.

Rule Motleyville to send its scrap parts for Kaos (failed).

He is voiced by Greg Proops, who also played Cryptograf in Asterix and the Vikings.

When Flynn, Tessa, and Whiskers arrived in Motleyville to see Sharpfin, Baron von Shellshock had Whiskers evilized and imprisoned Flynn and Tessa after announcing that he was in charge of "the new Motleyville". As the Skylander arrived on the scene, Shellshock sent the evilized Whiskers after them but fled when they managed to drive the evil bird off. During the course of the chapter, the Skylander had to chase the cowardly crab down through Motleyville, while getting past the obstacles Shellshock set up for them. After pursuing Shellshock to the core of Shark Town at the Motleyville Mall, the Skylander discovered that he had built a crab-like machine specifically to fight the heroes. Shellshock was soon defeated but swore that they hadn't seen the last of him. However, his words weren't taken seriously by Sharpfin, Tessa, and Flynn. Furious at this, Shellshock lashed out at them for not paying attention to him. In response, Sharpfin sent a few of his Dirt Shark companions to beat up Shellshock, who then ran away.

Shellshock has redeemed himself and now operates an arena called Battlebrawl. Though he tries to convince the Skylanders to be the main event, he walks away and pays them for their trouble but not before directing an insult at them.

Shellshock appears in a cameo where he has become a well-known Creation Clash player called The Baron. 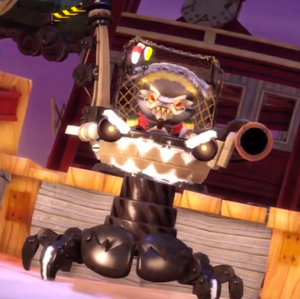 "My precision mechanism of immense power will crush you! And it will hurt, too!"