Leader of the Masters of Evil

Help HYDRA and the Masters of Evil rule the world.

Kill Captain America and the Avengers (all failed).

He is one of the first leaders of the terrorist organization HYDRA and the leader of a group of supervillains known as the Masters of Evil.

He is voiced by Robin Atkin Downes, who also portrayed Abomination in the same series, as well as Doomsday in Batman v Superman: Dawn of Justice, the Medic in Team Fortress 2, Travis Touchdown in the No More Heroes series, Abomination and Annihilus in the 2010 Marvel Animated Universe, Broseph Chillaxton in Regular Show, Lachlan McDermott in Criminal Minds, Luxord in the Kingdom Hearts series, Deathstroke in Beware the Batman, Riddler in Batman: The Enemy Within, Falcon Graves in Ducktales, Mumm-Ra in ThunderCats, Shinnok in Mortal Kombat Legends: Battle of the Realms, Emperor Nefarious in Ratchet & Clank: Rift Apart, and Scarecrow in Batman: The Long Halloween.

Dr. Heinrich Zemo was the head of HYDRA's bio-weapons division during World War II. He was responsible for the imperfect Hydra version of the Super Soldier Serum that created the Red Skull.

Zemo eventually obtained the title of Baron. Over the years, he took control of HYDRA and ruled it with an iron fist, continuing his projects and working toward world domination. He valiantly led HYDRA as the organization assisted the Axis powers in conquering Europe. His vile acts were infamous and he used to have to wear a mask to conceal his identity and avoid retribution.

In 1943, while on a mission to defeat Zemo in Italy, Captain America discovered one of Zemo's germ warfare virus called Virus X. Intending to infect and annihilate all the Allied forces, the Baron was stopped by Cap. In the ensuing fight, a large batch of the Virus was drenched upon Zemo, adhering his mask right to his face and infecting his vital bodily systems.

From that day he swore revenge, but upon Captain America's presumed demise at the end of the war, Zemo was left without a reason to continue with his old nemesis gone. He went into hiding alongside Arnim Zola, who used his machines to keep the virus at bay, and Zemo alive. This process kept him alive for decades, until his eventual capture by the S.H.I.E.L.D. agents.

After escaping The Raft, Zemo confronts Baron Strucker in order to reclaim HYDRA only to be told that Captain America is alive. Zemo seeks out Arnim Zola who manages to use his machine to keep Zemo from dying as he mentions that his rash treatment almost worn off. Arnim Zola ends up loaning Doughboy to Zemo in a plot to eliminate Captain America. Zemo ends up fighting Captain America until interference by the Black Panther enabled Captain America to gain his shield. Captain America fends off Zemo who ends up limping away while Captain America used his shield to block the bomb that Zemo threw near Wasp. When Zemo arrives back at Arnim Zola's lab, he finds Arnim Zola pinned down by Skurge the Executioner and Amora the Enchantress makes an offer to Baron Zemo.

Later, Enchantress and Zemo find and reassemble Simon Williams (Wonder Man), after his ionic energy form destabilized while fighting the Avengers. They offer him the chance to be restored to human form as long as he helps with their plan to destroy the Avengers. Soon after that, he recruits the Crimson Dynamo (Anton Vanko) to his cause. After that, he, Enchantress, Executioner, Simon, and Vanko find the Abomination (Emil Blonsky) in the Nevada Desert, after being defeated and sent flying by a punch from the Hulk.

After Abomination becomes a member, the criminal organization known as the Masters of Evil were formed, with the sole task of destroying the Avengers. First, Enchantress lured Wasp into a trap, attacked and confronted by all the members. Zemo used her secruity pass to infiltrate the Avengers Mansion where Dynamo defeated Iron Man, who was caught off guard whie checking his armor. Enchantress then tricked Hulk, and exiled him to the Asgardian realm of the Frost Giants, leaving Captain America left to defeat. Simon and Executioner took him down, while Zemo mockingly had the last laugh.

After luring Thor back to the Mansion, Zemo believes he now has all the Avengers defeated. Zemo begins to toy with the now imprisoned Captain America and mentions that he's working with someone that will ensure he will finally rule the world (Loki). However, Hawkeye and Black Panther arrive and catch the Masters of Evil off guard and begin taking them down one by one. After capturing them as well, they reveal to Zemo that they were simply a diversion, while the shrunken Ant-Man crept back into his labs. Pym appears and uses his technology to destabilize Simon, while Hawkeye and Panther free the rest of the Avengers. Near defeat, the Enchantress teleports herself and the Masters of Evil to safety, back to Arnim's laboratory.

Baron Zemo later appears leading the group of supervillains once again against the Avengers, now including three new members who are Chemistro, Living Laser and Grey Gargoyle (Grey Gargoyle is later killed by Executioner). Though Zemo knows Enchantress and Executioner attempt to betray him (when he gets suspicious after they said Grey Gargoyle did not survive the battle with them), he still goes along with their plan. While the rest of the Master of Evil guard the stone and fight each member of the Avengers, Zemo fights Thor with the help of Enchantress. After this, he attempts to activate the Norm Stones so the army of Asgard will invade Earth. Thor warns him that Enchantress is just using him, but he already knows and never trusted her from the beginning. Zemo then puts the Control Collar on Enchantress's neck (the same way in which the Red Skull also once used to control all of the Asgard warriors and creatures in the past) and demands Enchantress to make all of the army of Asgard to obey him. However, Thor manages to break free of his restraints by getting his hammer back, and knocks Zemo unconscious and notifies all of the Avenger to destroy the stone at all costs.

Several weeks after the battle with Loki and his defeat, the Living Laser was hunted down by Enchantress and Executioner in an attempt to find and kill Zemo for betraying her. Living Laser, however, didn't know where he was but told her where Chemistro was but was betrayed and frozen between his humanoid body and laser body. She then hunted down Chemistro thinking he knew where Zemo was but he also didn't know where Zemo was either. Chemistro then leads her to Arnim Zola before she used his gun to turn him to gold. She then tried to get info from him but failed (possibly killing him). While this happened Zemo watched and sent Crimson Dynamo to stall her as long as possible.

He then requested assistance from the Avengers and while Iron Man and Hawkeye went to save Vanko they prepared for the Enchantress. He then entrusted Captain America to activate the machine which would neutralize her powers, not knowing that he was secretly a Skrull in disguise. After Enchantress arrives, Captain America didn't activate the machine, disappointing Zemo but he reveals he has a back up plan by using a different type of Norm Stone. However during the battle it was destroyed by Wonder Man and transported Enchantress to an unknown world. Zemo then tells Captain America "you would have let the Enchantress destroy me!", where the Skrull impostor slightly reveals himself saying "you have no idea who I am" and Zemo briefly sees his true from through his shadow before knocking him out. Zemo and most of his comrades are then taken into custody.

Later, when Annihilus was about to attack Number 42 (a prison in the Negative Zone for supervillains), Zemo asked Captain America if he would let him help them fight the bugs alongside him. Captain America refused and told him that he would rather face a million bugs than let Zemo kill him from behind with a knife as Zemo tried to many times in the past, so Zemo stayed locked up in prison. It is unknown what happened to him afterwards.

Baron Zemo is a proud man, full of wicked ambition. He also strives to rule the world, and is also cunning, as he is also to deceive Amora the Enchantress long enough to use her for his plans and then deceive her, although in her plans she and her master Loki ultimately outranked him. He is also grievous and cruel, attempting to take Captain America's life on many occasions and showing no remorse at his longtime friend Arnim Zola (apparently) dying. Full of evil, Zemo showed no care for the rest of the Masters of Evil, and after HYDRA fell, tried to use them to take over Earth, as Loki had falsely promised. To add on, he is an evil mastermind and was the first person to notice something suspicious about Captain America, who was secretly a Skrull in disguise.

However, despite Zemo's cleverness and fearlessness in battle, "Acts of Vengeance" shows that he will always prioritize his own life above anyone else's as he risks Surtur destroying the world by using the last Norn Stone as a shield against the Enchantress. He also sends Arnim Zola and Crimson Dynamo to die in his place.

Zemo during the Breakout. 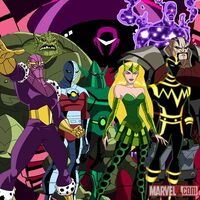 Zemo and the other Masters of Evil. 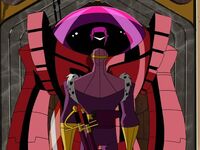 Zemo using the last Norn Stone against the Enchantress.