Conquer the kingdom of Channon and capture the capital, Rylos. (Unknown)

Transforming all living into an undead. (Unknown)

Attempted to kill all living creatures

Conquer Undead Monarch
Baron von Tarkin was an undead lich king, ruler of the Korresan region and one of Channon's conquerors. He created a huge undead army and advanced to the enemy capital. He is a playable character in Heroes IV; Winds of War.

Little is known about the life of Baron von Tarkin. It is certain that in the Korresan region there was already a devil baron Maximillian Devlos, from whom Tarkin took power and turned the previous baron into an undead servant. A demon rebellion broke out for the liberation of Devlos, which was completely suppressed by Tarkin in a very short time. After that, no one dared to rebel against Baron von Tarkin. However, the baron was starving to a bloody and great war. Tarkin was very upset by the peace of the neighboring kingdom, Channon, and the strength and well-being of the living. The baron is determined to conquer Channon, destroy the people who live there and create an army of undead that has never been seen before.

Tarkin began preparing for the attack on Channon when he received unexpected news. Archaeologists from the other neighboring kingdom, Quassar, came to examine Korresan's tombs. It was very important for Tarkin to own the tombs, because he was able to acquire spells, wealth and several followers from these places. Archaeologists have set up guards to protect the graves from possible attacks by grave robbers. Tarkin knew the timing wasn't right, but he took the risk. He organized attacks on neighboring Qassar settlements and tombs, but knew he had to do it in the greatest secret.

Days later, Baron von Tarkin launched an attack on archaeologists and settlements. Everything went according to plan, the hordes of undead swept away the enemy, and there was no worthy opponent against Tarkin. After all resistance had ceased, Tarkin headed for the graves with his followers. Lots of gold and graves were found. Almost all the graves were robbed, and Tarkin resurrected the dead and obeyed only the Baron's orders. Now everything was ready to attack the kingdom of Channon.

Channon was unexpectedly hit by another attack. Baron von Tarkin achieved serious and great success. Within four weeks, a dozen cities were destroyed and the number of his undead army increased steadily. The first really serious battle took place in the Alderoth Valley, which was a strategically very important place. From here it was possible to reach the capital of Channon in the shortest time. The knights and followers of Life decided to confront the baron's army. Baron von Tarkin did not risk a missed opportunity and a back attack. He had decided that in this Valley he would deliver a devastating blow to his enemies. Knights were even aided by druids and creatures of nature. But Tarkin did not wait for that the enemy's armies join together. He immediately set off for the small towns of the Druids with his huge army of undead. The enormously powerful undead baron, with his vast swollen army, frightened even the creatures of nature. More and more people chose to flee, the druids and the creatures of nature were constantly scattered, and no one could stop Tarkin. The baron occupied the two cities of the druids and killed the defenders without exception and then resurrected them as dead.

Thomas Acorn, leader of the druids and guardian of the Alderoth Valley, retired to the woods where he gathered his remaining forces. But Tarkin followed the druids with his army and in the bloody battle the baron killed the druid leader and destroy his troops. The remnants of the forest creatures have fled or surrendered.

After this, Baron von Tarkin set out with all his forces against the castles and cities of Channon. The towns of Channon had fallen one after the other and most of them had big killings. Baron von Tarkin had no mercy on the defenders or the civilian population. Many have died and most of them have been resurrected as undead. Three or four cities have fallen in the Alderoth Valley, and Tarkin has won over Channon.

The Hand of Death

After the conquest of the Alderoth Valley, Baron von Tarkin began his preparations to continue the advance. The Baron left a group behind to guard the valley and avoid the supply lines from a possible counterattack. Tarkin had to cross the Dragonsaddle Mountains to reach the capital of Channon. The baron took an interesting step. He recommended a deal to the mayor of a nearby town, Olos. In exchange for gold and a few estates, he prepares Tarki's army for the undead to invade the remaining cities. The main target was the Angelmist Castle, a huge fortress that could be used if the siege of Rylos failed. Channon's forces did not expect a serious attack from here, sending their most important forces against Erutan Revol's elves and Mongo's barbarian forces. Tarkin learned in a few weeks that Channon had been attacked from several directions by other conquerors. That's when the baron launched his attack.

He knew Channon would do his best to reinforce Rylos after that so he had to push forward quickly. The attack and advancement went as planned: Baron von Tarkin securing the mountains for a few months, occupying five cities, and then acquiring the Angelmist Castle. The mayor of Olos didn't help much, but the baron spared his life. The leader of the forces of Channon, a paladin Rictis Iblemen fell against Tarkin and his remaining troops were completely destroyed. Then Baron von Tarkin and his huge army of undead reached Rylos, where the other conquerors were preparing for the final siege.

Baron von Tarkin wore an ornate armor, his legs covered in red clothing. He also wore red bracelet on his arm bones, and an ornate red crown on his head. He always carried his magical scepter and often sat on his undead unicorn horse. Instead of Tarkin's eyes, there was a red-glowing dark force that caused terror to those who looked at him and were not a living dead.

Baron von Tarkin was a very definite and cunning undead ruler of Korresan. He loved the war, and he loved making war plans, which he could use to destroy his enemies. He hated peace and disliked the living, but sometimes there was an exception when he showed mercy (Mayor of Olos).

Of the five conquerors, Baron von Tarkin was the only one who did not insult or disparage his enemies. Rather, he liked to think or plan what would happen if he wins a battle or defeats his opponent. But he didn't trust even his followers, he always acted prudently, only risking when he needed to. In the battles, Tarkin was cruel, ruthless, nefarious and fearful. He enjoyed killing the living, indiscriminately turning anyone or whatever he could into his own undead servant.

Baron von Tarkin was the most dreaded of the five conquerors, and the other strong conquerors feared him. Tarkin was one of the masters of Death Magic, and was very powerful in magic and combat. He destroyed several armies of Channon, the creatures of nature and druids could not stand in his way, until Rylos' siege there was no enemy capable of defeating him. 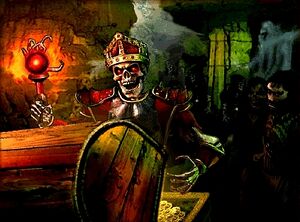 Baron von Tarkin and his minions robbing a tomb. 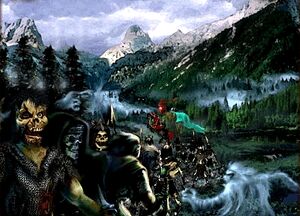 Baron von Tarkin and his undead army after they conquered the Alderoth Valley.
Add a photo to this gallery

Retrieved from "https://villains.fandom.com/wiki/Baron_von_Tarkin?oldid=3483156"
Community content is available under CC-BY-SA unless otherwise noted.