Baroness von Krimm is the main antagonist in "My Favorite Prisoner", a Season 4 episode of Hogan's Heroes.

She was portrayed by the late Marj Dusay, who would be known for playing the evil Vanessa Bennett in All My Children.

Baroness von Krimm caught the eye of Colonel Hogan at a gathering orchestrated by Colonel Klink, unaware that she is also an agent planted by Klink and Schultz in order to get information from Hogan. He is invited to the Baroness' place, where they engage in a romantic embrace. Hogan discovers the plan and uses the Baroness to further his own plan, which includes a British captain, Sears, and planting phony plans to set up the Germans. The Baroness gets Sears arrested, but she is later diverted by Hogan while the Heroes break Sears out. 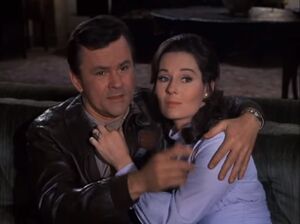 Retrieved from "https://villains.fandom.com/wiki/Baroness_von_Krimm?oldid=3512081"
Community content is available under CC-BY-SA unless otherwise noted.