Take over the kingdom of Alabasta.

Criminal Organization
Baroque Works was a criminal organization in the manga and anime series One Piece, serving as the main antagonists of the "Alabasta" Saga. It was created by the Shichibukai, Sir Crocodile, to take over the kingdom of Alabasta.

The Baroque Works was formed by Crocodile for the purpose of taking over Alabasta so he could transform it into what he believed to be an ideal nation, in a plan known as "Operation: Utopia", and among their ranks were many bounty hunters and other fighters who had been lured in by such a promise. To do so, the Baroque Works sought to undermine the royal family of Alabasta in order to trigger a rebellion, allowing them to rise to power and remake Alabasta in their own image.

All of the members of the organization are given code names to hide their identities, with the male members having numerican designations while the female members use aliases named after holidays. 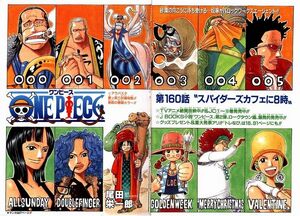 Retrieved from "https://villains.fandom.com/wiki/Baroque_Works?oldid=4106194"
Community content is available under CC-BY-SA unless otherwise noted.