Barracuda is Frank Castle's archenemy in The Punisher MAX. He is a mercenary gangster of great physical strength, endurance, fighting ability, and exceptional intelligence. He shows an incredible sense of optimism and "glass half full" thinking, profane humor, and a tendency to betray anyone if he can benefit from it. He was the main villain of Long,Cold Dark,and of his own miniseries. He will appear in the mainstream marvel universe starting in the miniseries Punisher vs Barricuda.

Barracuda was the oldest of three siblings who lived in Boca Raton. He raised them all by himself while also enduring heavy physical abuse from their alcoholic father purely for their sake, having his hand forcibly put on the grill in order to be made "hard as the motherf-cking world itself". After the dad finally abandoned his children, 'Cuda took his rage out on the rest of the world due to his inability to find and get revenge on his father. One day at elementary school, 'Cuda killed a bully by gouging his eyes out with his thumbs before later castrating his attempted rapist while in juvy, the latter of which led to him being enlisted in the military. At some point, Barracuda's brother died and his sister became a drug-addicted prostitute.

'Cuda is a known rapist and cannibal, having raped Jonathan Digby in prison (and at least one other inmate) and gladly feasted on the remains of an African tribal chief's dead brother that looked like jambalaya. He once snorted lines of cocaine off a decapitated head as well. In Fury: My War Gone By, during Nick Fury's time with the Contras in 1984, 'Cuda led the wholesale killing, kidnapping, torture and rape of thousands of villagers in Nicaragua, which included cutting out a woman's unborn baby before then stomping on it, as well as executing three men with a chainsaw. When Fury soon discovered and confronted him on these atrocities, 'Cuda kicked a child's decapitated corpse like a soccer ball just to show how little dishonoring the American uniform meant to him. Five years later, Fury exacted justice on 'Cuda by brutally beating him with a baseball bat, breaking many bones and knocking out several teeth, hence why he has gold teeth that say "f-ck you" in the present.

Twenty years before Volume 6, 'Cuda met the insider trader Harry Ebbing in prison, mutilating (but not killing) two would-be rapists by sewing their eyelids shut after replacing their respective eyes with the other one's testicles. In the present, Harry hires 'Cuda to kill Frank Castle for interfering in his plans. Before going after Frank though, 'Cuda kidnaps a fellow criminal named Horace, who for some reason took a whole week to pay him off for a mass-assassination he carried out for him. Afterwards, 'Cuda goes after Frank and knocks him out cold with a wooden stick, but not before the Punisher stabs out his right eye and chops off all the fingers on his right hand. And unfortunately for him, the amputated fingers made direct contact with ice without being bagged first and thus destroyed the nerve endings, meaning they can't be reattached. Later on from that, 'Cuda takes Frank and Horace out into the middle of the ocean with his boat, throwing them both to a nearby shark; Frank survives, but Horace doesn't. At the end of the arc, Frank and 'Cuda briefly team up and blow up a yacht full of Dynaco shareholders from within more shark-infested waters, including the traitorous Dermot and Alice. Once 'Cuda outlives his usefulness, Frank shoots him in the chest and leaves him to the sharks.

However, it's later revealed in Barracuda's titular spinoff comic that the sharks simply left him alone due to being full from eating all those people from the yacht. Currently looking after "Big Chris" Angelone's hemophiliac son Oswald, 'Cuda travels with him to Santa Morricone in hopes of getting him to kill the drug lord Leopoldo Luna, who just so happens to be Barracuda’s former friend. However, 'Cuda is secretly planning to betray and murder both Big Chris and Luna in order to make enough money to go after the Punisher, leaving Luna's ex-pornstar wife Wanda Luba in charge. Before Big Chris attacks Luna's mansion with an army of soldiers, Luna commits suicide by jumping into a volcano after discovering that he had sex with a male cross-dresser (Fifty). In the ensuing firefight at the mansion, 'Cuda saves Oswald by killing a pedophile priest who was about to rape him, and Fifty sacrifices himself so that they and Wanda can escape with their lives, much to Barracuda's callousness as he calls him "general dumbass".

As 'Cuda, Oswald and Wanda escap on a helicopter, Big Chris secretly holds onto the landing skids, attempting to kill 'Cuda with a gun while the chopper's up in the sky. However, Oswald finally steps up and pulls out another gun to shoot his own father in the head, killing him much to 'Cuda and Wanda's pride. However, 'Cuda forgets that Oswald is hemophiliac and smacks his back too hard on accident, killing him almost instantly. Worse still, 'Cuda clearly cares less about the fact that his friend just died and more about the fact that he's not gonna get any money now. As the chopper runs out of fuel, 'Cuda and Wanda kill the pilot and use a life raft to preserve themselves on the ocean below. The two survivors have no food or supplies whatsoever, implying that 'Cuda is going to cannibalize Wanda for survival.

Finally, in Volume 9, 'Cuda tortures and kills Yorkie Mitchell (Frank Castle's war buddy) and his wife Angie in their own home, before kidnapping the Punisher's infant daughter Sarah from a daycare centre (where he also killed a woman who tried to stop him), after which he kidnaps Frank with plans to torture and possibly cannibalize her to death in front of him. When that plan backfires, 'Cuda settles with boobytrapping Sarah’s seat with explosives in an attempt to kill them both instantly. When that fails as well, Frank and 'Cuda engage in a bloody drawn-out fight that ends with the former chopping the latter's arms off with a fire axe before unloading an entire AK-47 clip into the monster's head, killing him once and for all before setting his corpse on fire just to be sure. 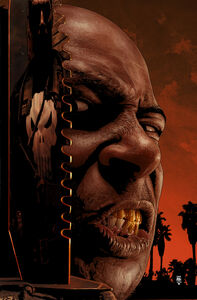 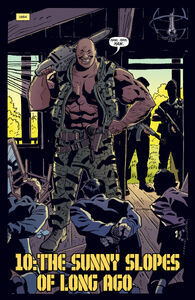 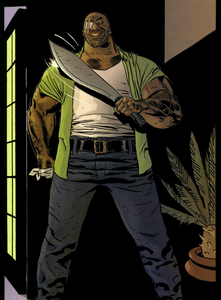 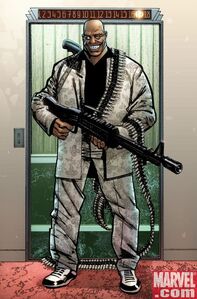