Crushing any Autobots in his way.

Retrieve information from Sam about the glasses before finding the Allspark (succeeded).

Return the Allspark to Megatron.
Kill his enemy Bumblebee
Get the Staff for Quintessa (succeeded).
Help Quintessa pump out all the vital energy of the Earth and restore Cybertron (all failed).

After being active on Earth for some time, Barricade arrived to pick up Frenzy at the airport after his attempt to hack into the U.S. military network on Air Force One failed.

Using data that Frenzy had acquired, they both learned of Sector Seven, "Project Iceman", Captain Archibald Witwicky and the discovery of the entombed Megatron. The two were able to use the internet to search one of Witwicky's descendants, Samuel Witwicky, whom his username known as ladiesman217, and a pair of glasses that Megatron had accidentally marked with the location of the long-lost All Spark. Frenzy declared that they need to find Sam, and Barricade moved out to search for him.

Later, Barricade confronted Sam regarding his recent eBay auctions while the human was fleeing Bumblebee, whom the human mistakenly believed was out to harm him. Sam fell for Barricade's ruse, and requested the "officer's" help, only for Barricade to ram him several times and transform before him. As Sam fled, Barricade knocked him onto the hood of an abandoned car, then violently demanded information on eBay item 21153, the glasses. Before Barricade could obtain the information, Sam ran into Mikaela Banes, who had been drawn into the encounter, and managed to escape him when Bumblebee convinced the boy to trust him. Barricade transformed and pursued both the Autobot and two humans to a junkyard. After temporarily losing and then regaining their position, he charged into battle, activating his mace/rotating blade, and dispatched Frenzy to chase down the humans. However, his battle with Bumblebee ended because Barricade had taken heavy damage. Considering the fact that Frenzy was decapitated, he got off lucky.

Evidently, though, he recovered and was back into full working order when Frenzy (who had survived and infiltrated Sector Seven's base) transmitted both Megatron and the All Spark's location to his fellow Decepticons. When the humans fled with the All Spark, Barricade joined in the pursuit along with Brawl and Bonecrusher. Brawl soon broke off on an alternate route, while Barricade and Bonecrusher hit the freeway, making contact with the Autobot/human convoy. Barricade attempted to clear some room for the two Decepticons by activating his sirens, however, Sam recognized Barricade and warned that they were in danger. Optimus Prime, Ironhide, and Ratchet aligned to block Barricade's access to Bumblebee, who contained the humans and the All Spark.

The Reign of Starscream

According to IDW Publishing's The Reign of Starscream comic, during the highway chase, Barricade attempted to close in on Bumblebee to "settle the score" with him, but was knocked off the road by Ironhide, causing him to crash into a pillar. Knocked offline by the crash, he missed out on the Mission City battle; he was conscious again by the time Starscream came looking for him. Informed that Sam had destroyed the AllSpark and Megatron, Barricade suggested recovering the lost Frenzy so they could access his data files on the boy. While Starscream returned to Cybertron, Barricade remained on Earth, watching over a Sector Seven research base.

After the events of Revenge of the Fallen, Barricade was among the Decepticon troops that Shockwave sent to attack Sam's college in order to recapture a rogue Decepticon brain unit Brains. Barricade initiated the assault, smashing his way into Sam's dorm and renewing his rivalry with Bumblebee. The pair grappled and traded blows for the duration of the attack until Bumblebee ended the battle by slamming Barricade to the ground with a sickening crunch.

Despite being absent in the second film, Barricade made an appearance in the third film. He was one of the many Decepticons seen in the invasion of Chicago. Eventually, he, Soundwave, Shockwave and many others rounded up most of the Autobots and held them, prisoners. With some motivation from Dylan Gould, Soundwave decided to execute the Autobots. Soundwave shoved Que/Wheeljack in the center of the circle where he was shot and killed by Barricade. Later on, his former defected minion Wheelie and his comrade Brains dumped debris from a Decepticon ship that they hijacked that freed Bumblebee and the other Autobots and resulted in Bumblebee killing Soundwave. Barricade is outraged over the Autobots escaping and Soundwave's death proceeded to lash out physically and verbally at his soldiers. When the N.E.S.T. reinforcements arrived, he was attacked and blinded by the snipers while confronting at a fellow Decepticon. Unfortunately, a soldier placed a boomstick on his leg created by the Autobots, crippling him and he is shot by the N.E.S.T. soldiers. Barricade then isn't seen afterward.

Barricade returns in The Last Knight and is the film's secondary antagonist, revealing that he survived the events of somehow survived after the battle for Chicago by unknown means, and he was the only Decepticon besides Megatron who was able to escape capture by the T.R.F. (Transformers Reaction Force). His robot mode is upgraded to include hints of blue patterns and now transforms into a new Ford Mustang police car. Megatron expresses anger at Barricade's failure to retrieve the medallion from Steelbane and Cade Yeager, making Barricade defend that he was forced to retreat to avoid getting shot at or taken prisoner by the TRF. To appease Megatron, Barricade notified him of the TRF which allowed Megatron to directly contact Colonel Lennox to secure the release of imprisoned Decepticons Mohawk, Dreadbot, Nitro Zeus, and Onslaught. Megatron and his crew then set out to go kill the Autobots and Cade Yeager hiding out in the junkyard. The Decepticons lose the fight, however, due to Grimlock being too much of a match for them. Only Megatron, Barricade and Nitro Zeus survive the fight which they retreat due to being outmatched. Then, Barricade pursues his arch-enemy Bumblebee in Oxford, England in an attempt to snatch Cade out of Bumblebee but also looking to resume fighting with his old foe, but the Autobot scout easily takes him out with a few blasts, as Barricade crashes into several human drivers and mutters "Ow! Oh, that hurt".

Barricade is seen during the final battle taking place at Stonehenge, but he disappears and if he survived at all his further destiny is unknown. 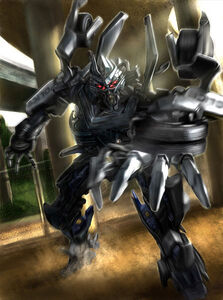 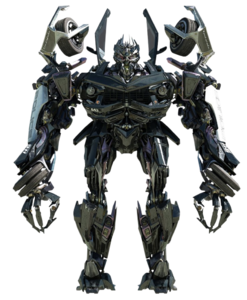 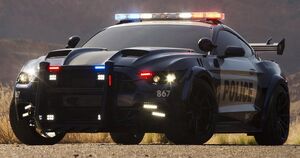 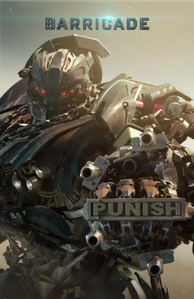 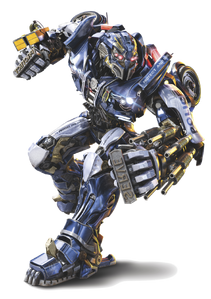 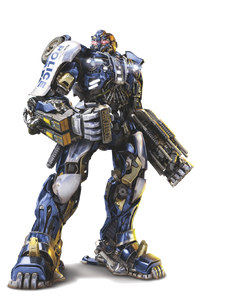 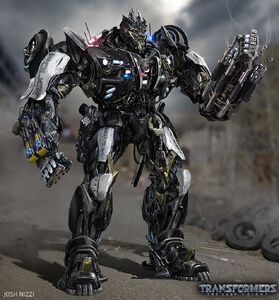 Initial concept art for The Last Knight for Barricade. 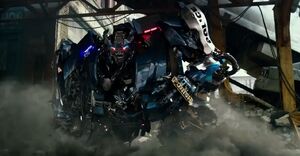 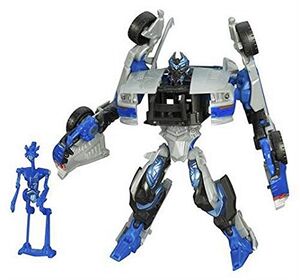 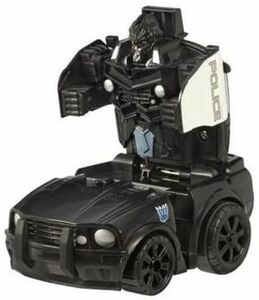 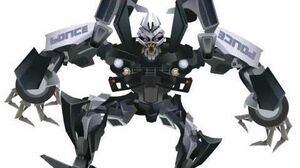 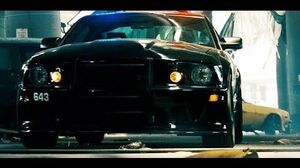