Kill Dr. Dolittle for abandoning him in revenge without helping finish his problem.

Please his mother by any means necessary (both failed).

Barry is a major antagonist of the 2020 live action adventure film Dolittle. He is a ferocious Bengal tiger with gold-tipped fangs and was originally an old friend of Dr. Dolittle.

He was voiced by Ralph Fiennes, who also played Amon Goeth in Schinder's List, Rameses in The Prince of Egypt, Dennis "Spider" Cleg in Spider, Francis Dolarhyde in Red Dragon, Lord Voldemort in the Harry Potter franchise, Victor Quartermaine in Wallace & Gromit: The Curse of the Were-Rabbit, Hades in Clash of the Titans and Raiden the Moon King in Kubo and the Two Strings.

Years ago, on an island of pirates, Dr. Dolittle started therapy with Barry about his emotional issues and were beginning to make progress. However, before they made a breakthrough, Dolittle ran off with the island King Rassouli's daughter Lily and in that time, Barry went unhinged and began to despise Dolittle.

Barry would then meet Dolittle years later after the latter gets imprisoned for attempting to retrieve his late wife's journal; however at the same time, the tiger was already insane as he was not able to control his aggression and said aggression became more severe. The signs of his mental illness came to light again as he began to talk about his mother and repeat her sentence that she was disappointed in him and why Barry couldn't be the same as his brother. Then suddenly, he turns over and begins to cry as he feels sorry for himself while being gentle and calm. Suddenly, everything disappears as it was revealed that Barry was faking and once again attacks Dolittle, who attempts to retreat. The vet temporarily distracts the tiger with light, but Barry quickly finds out and is furious before trying to bite Dolittle.

Polynesia, a parrot accompanying Dolittle, arrives to help him, but she is unfortunately attacked by Barry, who breaks her wing. However, Chee-Chee the gorilla enters the fight and easily defeats Barry after he eventually overcomes his fear of tigers. Chee-Chee does not kill Barry, but only suffocates him into unconsciousness so that the tiger cannot get up. Lying on the ground, Barry whispers to his mother if she is proud of him before passing out. It's unknown what happened to Barry afterwards, but it is likely that he woke up only to find that Dolittle was already gone, much to his anger.

Barry is a large muscular Bengal tiger with a scruffy hide, flared up side fur and gold-tipped fangs.

At the time Dr. Dolittle started his therapy, Barry was already aggressive and belligerent but lessen his hostility as progress is made. However, following the former's escape with Lily, the tiger's hostility increased to the point that Barry became resentful, unstable, and vicious. 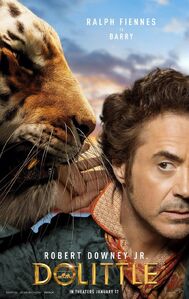 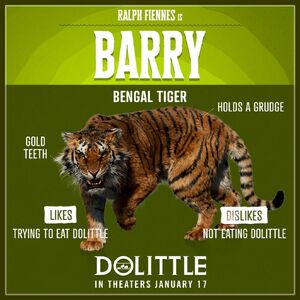 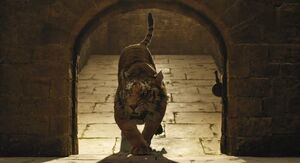 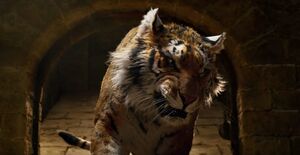 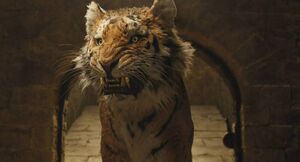 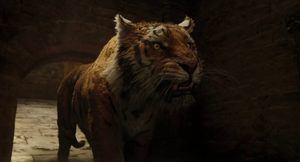 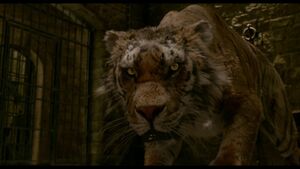 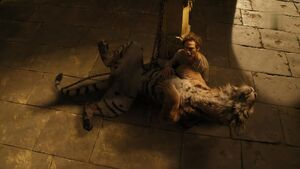 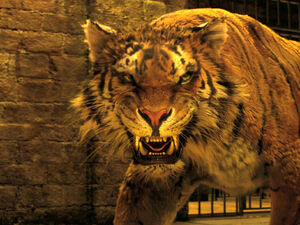 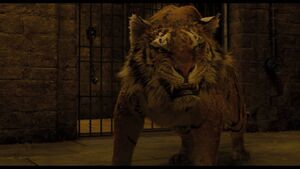 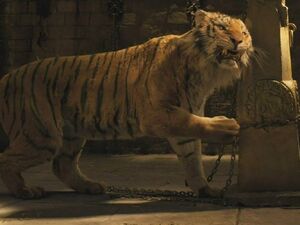 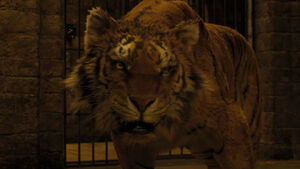 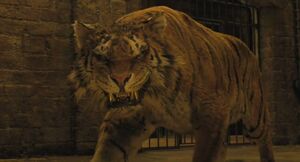 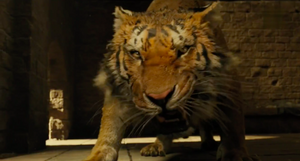 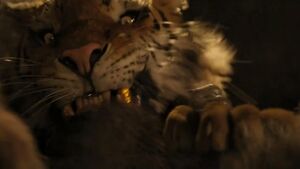 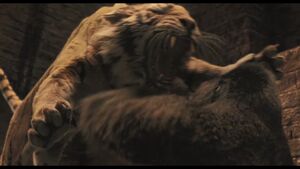 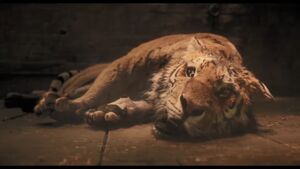 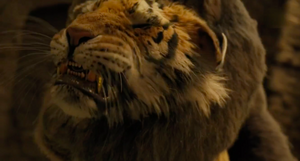 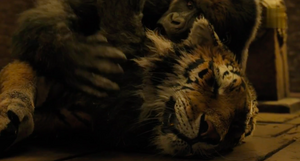 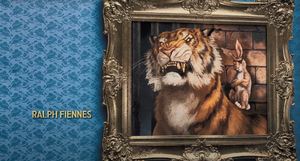 Barry in the end credits.