Barry is a one-time antagonist of the FOX animated sitcom The Cleveland Show, only appearing in the episode "The Way the Cookie Crumbles". He managed to scam LeVar and Evelyn Brown out of their life savings, when pretending to be a modeling agent. This eventually led to them losing their home and having to move in with their son.

He was voiced by Gregory Jbara.

Cleveland was disheartened to find his mother and father selling all of his childhood belongings in a garage sale, without his permission. They refused to stop selling his stuff, so he had no choice but to buy everything from them. Now, with all this extra stuff in his house, Donna made him buy a storage unit, so they could have enough space in their room. When Cleveland went to his storage unit, he found his parents, living inside of their own storage unit. When asked about this, LeVar admitted that he lost the house, after a telemarketer had scammed them out of their money. Cleveland laughed at his father, for having become a dumb old man, a well deserved insult after how rude his father had been to him earlier.

After being insulted time and time again, by Cleveland, in his house, LeVar was finally fed up with it, and angrily went back to his storage home. Evelyn finally told Cleveland that it was her, who got scammed. She then explained how this the story about them being scammed by a telemarketer was completely false. The real story went, where she was at the mall and a nice young gentleman by the name of Barry told her that he was a modeling agent and that he could give her a job as a model. Flustered, Evelyn jumped the gun and spent her entire life savings on modeling classes, speech lessons, and head shots. Her husband was just nice enough to cover for her foolishness and not rub her nose in it, the way Cleveland was.

Cleveland made amends with LeVar, and they got an idea on how to take this Barry fellow down. He, LeVar, and The Guys dressed as women and went to the mall, so that they could trick him into taking them in, so they could catch him in the act. When they found him, he instantly caught on to their act and saw right through their disguises, saying that he's seen their ruse before. Barry argued that what he did was completely legal and that there was nothing they could do about it. LeVar then started beating him up. While he did, Rallo announced the scene. This caught the Barry's attention and he said that this the kid's personality would lead to him being a sit-com star. He then proceeded to scam Cleveland, LeVar, and Rallo out of their money, successfully suckering them the same way he did with Evelyn. The trio walked home, naked, wearing barrels over themselves, finally admitting defeat to Barry.

Barry is a Caucasian, adult male with brown hair, he wears in a ponytail with a light green ponytail holder. He has a well-built face with pronounced cheek bones and a big chin with a cleft. He wears a blue cowboy vest and a green undershirt that has a blue gem on it. He also wears blue pants and light blue shoes.

Barry is a cunning and manipulative man who has some very sneaky and underhanded ways of taking people's money from them. He is very confident in his actions, mainly because he knows that there is nothing technically illegal with what he's doing, so he gets to scam people all he wants and get away with it. He is not, however, too much of a fighter, as when LeVar was beating him senseless, he did absolutely nothing in self defense. 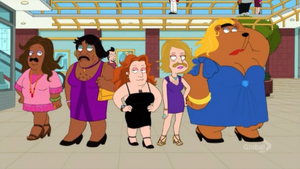 The Guys in drag, planning to take Barry down. 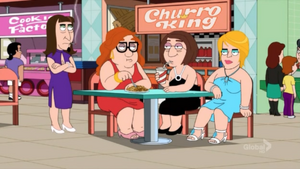 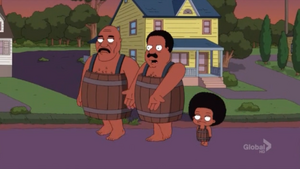 LeVar after being fooled twice.