Talking to himself (in which case he refers to himself as "Other Barry").

Torment or kill Archer for everything he's done to him (formerly).
Reunite with his mother(succeeded)

Bartholomew Aloysius Dylan, better known as Barry Dylan, is the main antagonist of Archer. He is a former ODIN agent who was turned into a cyborg by the KGB, eventually becoming the head of the KGB. However, after he was trapped in space on the ISS Horizon, his position was usurped by Katya Kazanova. He also serves as the archenemy to Sterling Archer.

He is voiced portrayed by Dave Willis.

While on a mission in Berlin, during which Sterling Archer burst into a room to kill two double agents, Barry ruined Archer's suit. As he clung to a cord to keep from falling off the balcony, Barry apologized to Archer, but the latter decided not to help him. Barry eventually fell on a car and broke his left leg which was fixed by two steel rods and 16 titanium screws.

As Archer and Malory talked to their lawyer about the blood test, Archer's baby, Barry walks in and informs them that ODIN will provide the paternity test. He has ODIN soldiers hold and take a large blood sample from Archer and will take the sample to the First Savings Bank, guarded by ODIN. After twenty-four hours, Barry informs them that Seamus is indeed Archer's child. However, Archer realizes that Seamus was Cyril's child.

Hearing about Malory selling ISIS to ODIN, Barry meets Lana at a restaurant, offers her Malory's position as "Regional Director for the Americas" if she sleeps with him. After Lana leaves due to foil swan was leaking Sweet-N-Sour, Barry enters the room and Archer angrily swats the foil swan on the ground as Barry notes "how you get ants."

Later, Barry is seen talking and polishing his gun, Lana talks to him about ideas, but reminds her of their deal much to Lana's chagrin. After hatching their planning, Cheryl lures Barry away to the mainframe by handing him a note thinking it was from Lana. Once entering the mainframe, Lana tells him about having second thoughts, before Ray closes and locks the door. Afterward, Barry receives two black eyes from Lana and leaves with an insane Len Trexler.

Despite his hatred for Archer, Barry agreed to a mission to rescue him from the KGB. After successfully freeing Archer from prison, their situation deteriorated, culminating in Archer allowing Barry to fall from a fire escape. Barry's previously injured leg is amputated by Russian doctors as a result.

However, the KGB turns Barry into a cyborg to use as an assassin against Katya Kazanova, a KGB agent in love with Archer and who defected to ISIS. Instead, Barry goes rogue and attempts to kill Archer, an act that becomes his primary obsession. Katya sacrifices herself at their wedding to save Archer's life.

Barry survives the fall because of his cybernetics and gloats at Katya's death.

"Heart of Archness: Part I"

Though Barry did not succeed in killing Archer, he was pleased to see Archer's emotional distress as he cradled Katya's body. He was unaffected by Archer firing bullets at him and ran off pleased at his enemy's pain.

Allowing Archer to suffer in emotional turmoil, Barry later usurps Nikolai Jakov, who is potentially Archer's father, as head of the KGB. He then kills Jakov in an explosion, which prevents a paternity test from ever being performed, further affecting Archer emotionally.

After Katya is revived as a cyborg by Dr. Algernop Krieger, Barry returns to kill Archer and Katya at their second attempt at marriage, only for the fight between the two cyborgs devolve into a sexual encounter, ending Archer's engagement once again. Barry is once more pleased to see Archer's pain at losing Katya.

Still resolved to fight and kill Archer, Barry follows him and the ISIS crew all the way into space after being told where he is by Krieger. As the ISIS crew is attempting to leave the station, they discover Barry is on board and taunting Archer into coming out to fight by offering a 'sick space robot' for him to use. Archer, however, puts his hatred for Barry aside temporarily and lets everyone leave.

After Archer defends Cyril from Malory's insult, Cyril rewards him for his kindness by using the shuttle's thrusters to destroy Barry's own spaceship, leaving him stranded.

Wondering how KGB agents were able to find Archer, it is revealed that Barry has been watching Archer's every move from outer space on the board horizon, while trying to build a spaceship to go back to Earth.

After Barry becomes stranded in space, Katya uses the time to take over as head of the KGB. Upon returning to Earth, Barry resumes exacting his revenge through sabotaging ISIS professionally due to Katya's insistence that he let Archer live.

Once Katya breaks up with him, Barry again attempts to kill Archer, this time at the wedding of Pam Poovey's sister, Edie Poovey. During the battle, Barry is shot by explosive rounds that Archer made sure to obtain prior to fighting him. Pam and Archer manage to defeat Barry, whose human skin is burnt off in a grain elevator fire. Despite having a visible hole in his torso after being shot by the explosive rounds, the hole is not present the next time he appears. While it's possible that he simply got it repaired, it doesn't explain how as it's supposed to be state of the art from Russia. With Katya being head of KGB, it's highly unlikely he got it repaired there.

When Barry returns, initially covered in bandages to cover his metal endoskeleton, he is revealed to have been put up for adoption as a youth. The ISIS team having formed a private detective agency, Barry temporarily calls a truce in order to hire them to find his birth mother, albeit holding Archer's mother, Malory, as a hostage to ensure compliance.

In Season 8, Archer: Dreamland, Barry takes on a dream persona called 'Dutch' Dylan who can be considered a main character due to appearing in every episode. However, Barry remains a recurring character in the show overall. Dutch is a murdering psychopath who works for mobster Len Trexler (Dreamland), who is mutilated by Archer after he drives a car over his legs, resulting in them having to be amputated. He is augmented by Krieger (Dreamland) and is a real pain in the ass/nemesis for Archer (Dreamland).

In Season 10, Archer: 1999, Barry takes on a new dream persona called "Barry 6", a robotic antagonist in Archer's futuristic sci-fi fantasy. He has a grudge against Archer for stealing from him and as later revealed in the season finale, for having sex with his fiancé Framboise. The pair fight each other as Archer's ship and the dream reality itself begin to fall apart and Barry 6 begins to take the appearance of his real world counterpart before the two die with the ship exploding and Archer finally waking up from his coma.

In Season 11, Barry is revealed to have reformed himself after reconnecting with his birth mother and had even visited Archer during his coma while affectionately referring to him as "bud". When he goes on a mission to destroy an army of mass-produced duplicates of himself with a very reluctant Archer, Barry ends up self-destructing to destroy one of the robots before uploading his consciousness into one of his duplicate's bodies and because of the risk he took, Archer finally sees that Barry has redeemed himself for his previous actions and now views him as a friend.

Barry appears in Season 12; however, it turns out that Other Barry has returned and taken control of him, and he knocks Archer out. In "Mission Difficult", Other Barry spends the entire episode fighting Archer and the gang, while simultaneously fighting with Barry for control of his mind. Archer uses a defibrillator to electrocute Barry, thus putting an end to Other Barry's rampage, but also rendering Barry unconscious.

Barry sometimes talks to himself and calls himself "Other Barry." Occasionally he refers to himself in the third person. In addition to conversing with himself, he has also been known to speak to, but not with, his gun.

Barry appeared to genuinely care for Katya Kazanova, Archer's one-time fiancé, who was resurrected as a cyborg by Dr. Algernop Krieger. However, his inability to let go of his grudge against Archer caused problems in their relationship early on. After she took over the KGB, Barry found himself playing a subservient role to her, and was clearly driven further into his psychotic hatred of Archer when Katya eventually dumped him.

When he returns in Season 7's "Motherless Child," Barry shows a much softer side, asking (and later forcing) the crew to help him find his birth mother since he was dropped off at an orphanage as a baby, believing that finding her might alleviate the emptiness and bitterness he feels. Though he is still unstable, he gets along better with the crew and leaves them on a warm note, genuinely thanking them and calling them his friends.

After appearing in Season 11's "Robot Factory", Barry has completely reformed himself and now works alongside the reformed ISIS. Once he reunited with his mother, he started improving himself, and according to him, he hasn't talked to "Other Barry" in two years. He shows great concern for Archer despite the fact he was once his most hated archenemy, having gone to visit him while he was in his coma eight times, implied to be even more times than Lana. Ironically, Barry is actually the most supportive of Archer after waking up from his coma, being the first person to ask how his physical therapy was going, being more patient with Archer despite continuously mocking and insulting him, in comparison with his other friends, and actually telling them that they need to be more supportive of Archer. Through the mission with Archer, they manage to connect, and after Barry sacrifices himself, Archer mourns over his supposed death, actually calling him a friend. Despite this, Barry does express hatred toward Lana for cruelly attempting to take out Barry and the other robot despite the fact that they were teammates, and states that while he doesn't bear grudges, "Other Barry" does. 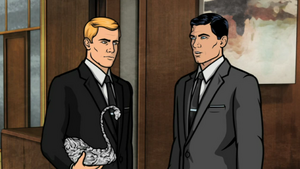 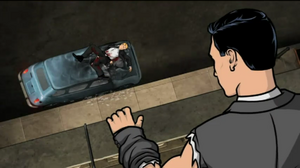 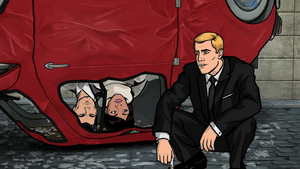 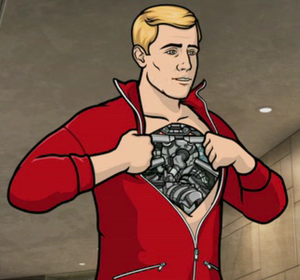