Barry Hubris is an antagonist in both The Tick comic book series by Ben Edlund and The Tick animated series. In both, he is a wealthy and greedy individual who assumes the title and persona of already existing superheroes in order to maintain exclusive rights to their identity and all the benefits that it entails. His scheme is finally put to an end in both incarnations when he challenges the Tick for rights to his identity and loses.

The comic book representation of Barry is similar to his later animated form, though in his original appearence, more of his background is explained. Barry is a career litigant, who dons to persona of different superheroes and challenges them to the exclusive rights to their identities and all that ensues from there. Upon defeating his opponents, they are legally forced to award Barry not only their superhero persona, but their entire estate and all legal possessions even remotely related to the title. Barry managed to carry out his evil plan with ease for many years due to his superior strength, cunning, and dirty tactics. Because of this he managed to amass a tremendous fortune. Despite his constant victories, there is no evidence that Barry ever used any of his heroic personas to fight crime or do anything remotely good.

Barry's criminal antics are finally brought to a halt when he decides to challenge the Tick to a legal (physical) battle at the Comet Club to claim rights to the Tick identity and estate. The battle is hard fought, and through a modified shield which amplifies kinetic energy, it seems at one point that Barry may actually kill the Tick, but the Tick manages to resist, and finally leave Barry in utter defeat.

After his crushing defeat, Barry is subjected to the same fate as all of the superheroes that he has victimized, and is legally obligated to award his entire estate to the Tick. After learning of this news, Barry suffers from a mental breakdown, and burns all of his clothing, becoming a nudist. He does not leave his house when the Tick and Arthur move in, and becomes fixated on getting revenge. Barry contacts the Terror, a notorious elderly villain, and sets up an ambush for the Tick. Unfortunately, Edlund ended his work in the series before the story arc could be completed.

In the animated series, Barry is still a fraud and a usurper, but much less is revealed about his past. He is still rich, and his brother-in-law owns the comet club. He still challenges the Tick to a battle at the Comet Club to determine who has legal rights to use the name and superhero persona of the Tick. Barry again proves a formidable foe to the Tick and nearly matches him in brute strength. He also still possesses his patented shield which he subsequently uses to nearly crush the Tick. During their fight, Barry unwittingly provides cover for a devoted supervillain, the Evil Midnight Bomber, to almost obliterate the Comet Club and everyone in it. In the end though, the Tick triumphs over his foe and Barry surrenders his claim to the Tick name. Unlike in the comic, this Barry is not forced to surrender his estate, and he is never seen again in the series. 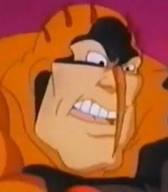 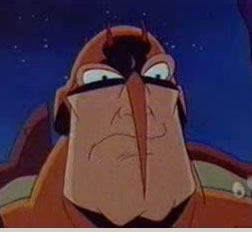 Retrieved from "https://villains.fandom.com/wiki/Barry_Hubris?oldid=3264863"
Community content is available under CC-BY-SA unless otherwise noted.