Subtly drive Serah Farron to assemble a group of l'Cie candidates together for branding by the fal'Cie Anima.

Barthandelus, also known as Galenth Dysley under his human form, is the main antagonist of Final Fantasy XIII. He is a powerful fal'Cie and can change into a human form, which allows him to control Cocoon. His goal, like all fal'Cie, is to find Etro's Gate. To that end, he plans to destroy Cocoon in order to sacrifice the residents so their souls can force Etro's Gate to fully manifest and reunite his kind with the Maker who created them.

He is voiced by Masauru Shinozuka in Japanese and S. Scott Bullock in English, the latter of whom would also later voice Hades in Kid Icarus: Uprising.

Barthandelus was a fal'Cie created by Lindzei, one of three god-like fal'Cie created by the god Bhunivelze as part of his intent to become immortal by finding the Unseen Realm Valhalla. Lindzei was given the Focus to protect Bhunivelze as he entered a deep sleep and the fal'Cie it created to portray themselves as benefactors to mankind while creating and maintaining Cocoon. Acting on his fellow fal'Cie's desire to be reunited with their creator, and believing Lindzei somehow found Etro's Gate and passed through it, Barthandelus orchestrates a scheme to sacrifice the millions of lives on Cocoon to force the gate open. But as he and those branded by Lindzei cannot act against Cocoon, Barthandelus uses the people of Oerba and wages the War of Transgression to give two of their Pulse l'Cie, Oerba Yun Fang and Oerba Dia Vanille, the Focus of becoming Ragnarok to destroy Cocoon's life support, Orphan.

However, the plan fails, as only Fang becomes Ragnarok due to Vanille's fear and unease, which leads to Fang not having enough power to destroy Orphan on her own. Nonetheless, the two women turn into crystal, anyway, despite technically failing at their Focus. Etro's intervention forces Barthandelus to bring the crystallized Vanille and Fang to Cocoon to await their eventual revival. Until then, the fal'Cie assumes various identities over the next 500 years, with his most recent being that of Primarch Galenth Dysley. It was only after the Pulse l'Cie are active that Dysley begins to discard his kind façade and orchestrate their meeting with him, alongside four citizens of Cocoon who were recently branded Pulse l'Cie: Guardian Corps sergeant Claire "Lightning" Farron, NORA leader Snow Villiers, airship pilot Sazh Katzroy, and fourteen-year-old middle-school student Hope Estheim.

Lightning and the party first confront Barthandelus, whom they still believe is Primarch Dysley at the time, onboard the Palamecia, trying to bring an end to the Sanctum's rule over Cocoon. Jihl Nabaat goes to defend him, not knowing the truth about him, but he kills her and the rest of the Palamecia crew. When he does this, Lightning thinks that he is just another l'Cie, this one of Cocoon, but he laughs off this remark and reveals his true form. After a long battle with him, he reveals their Focus: to destroy Cocoon by killing the fal'Cie that gives it power, Orphan, and leaves them an airship as he fades from their sight and watches them as they make their way out of Cocoon and down to Gran Pulse.

Over a week later, in Oerba Village, he takes the form of Lightning's sister, Serah, and taunts her and Snow, Serah's fiancé, before turning back into his human form. Here, he tells them that he will use the Cavalry to kill Orphan by fooling them into thinking that their leader, Cid Raines (whom Lightning and the rest of the party had recently learned had been branded a Cocoon l'Cie, likely by Barthandelus, long before they had met him to keep him under Barthandelus's thumb and prevent him from stopping his plans), is just another puppet of them. He battles them again in his true form and gives them another airship to return to Cocoon before leaving.

As it turns out, Barthandelus had lied to the party about his plan for the Cavalry, as he had never intended for them to reach Orphan. No, that had simply been a ruse to spurn the party into returning to Cocoon, hoping that they would enter Orphan's Cradle, their final dungeon, and destroy Orphan themselves. However, when Lightning, Snow, Vanille, Sazh, Hope, and Fang confront him for the final time, he is blindsided when he learns that the six Pulse l'Cie plan to protect Cocoon by not destroying Orphan and just destroying him instead. He decides that this show of "willful insolence," as he calls it, means that they are no longer reliable, and he will instead get new l'Cie to kill Orphan. He turns back into his true form and fights them once more, this time intending to kill them all if they continue refusing to obey their Focus. Lightning and the party defeat him once and for all, and he sinks into the cradle to become Orphan's shell, ceasing to be an independent entity. 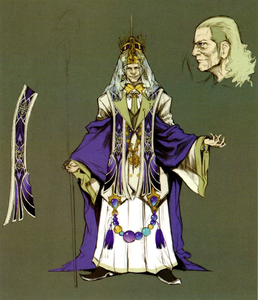 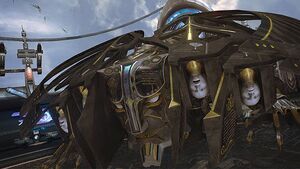 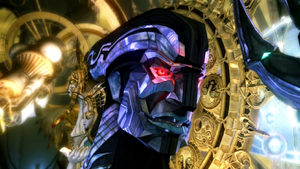 Barthandelus combined with the shell of Orphan. 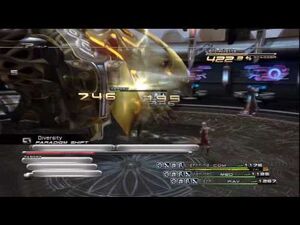 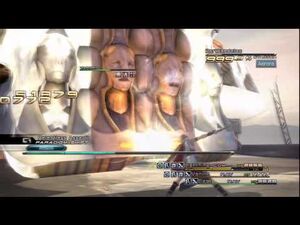 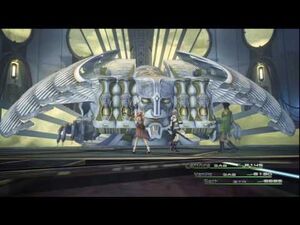