Aid Ratigan in his schemes.

Bartholomew was one of Ratigan's henchmen in Disney's 1986 film The Great Mouse Detective.

He was voiced by the late Barrie Ingham, who also voiced Basil in the same film.

Bartholomew is an alcoholic. He was constantly seen drinking from a beer mug and became disappointed whenever he ran out. During Ratigan's song, he got very excited when Ratigan dumped a bottle of champagne into his water fountain. He immediately started drinking from it. Then, Ratigan kicked him, and Barholomew fell in and started swimming around in it. When Ratigan talks about his history with Basil, Bartholomew started crying (most likely due to being drunk). Later, when they are finishing up a verse of the song, he drunkenly says, "To Ratigan, the world's greatest rat!", which makes Ratigan very mad (as he despises being called a rat, because he has an above average intelligence). Ratigan threw him outside the hideout and summoned Felicia with a bell. Bartholomew was too drunk to notice her, and she easily caught and ate him. After a short period of mourning from the other henchmen, Ratigan suggested that they finish the song before he threatens to have Felicia eat the rest of them, which they do out of fright.

Bartholomew appears as an Ally for Ratigan's deck in the official card game, Villainous. Bartholomew is an extremely weak minion and is normally only capable of defeating Olivia without being buffed by a separate card.

Bartholomew's real use within the game lies within the Felicia card; the powerful cat be played for only one power currency instead of two if an ally card card is discarded as a sacrifice and poor Barthomolew is the perfect card to discard. This is a clear reference to his fate in the film. 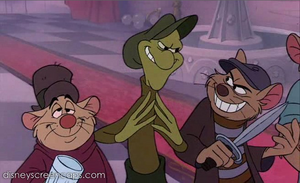 Bartholomew with the other thugs 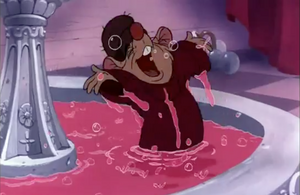 "To Ratigan, the world's greatest rat!" 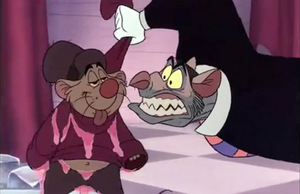 Bartholomew, with an angry Ratigan 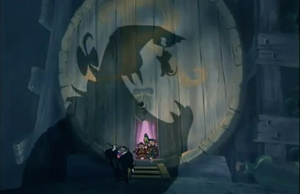 Bartholomew, seconds before being eaten by Felicia 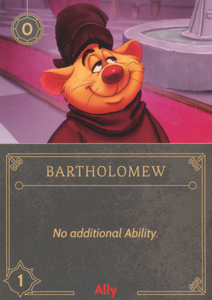 Bartholomew's card in Villainous.
Add a photo to this gallery

Retrieved from "https://villains.fandom.com/wiki/Bartholomew?oldid=4040450"
Community content is available under CC-BY-SA unless otherwise noted.