Taking care of his car

Get away from his crimes. (failed)

Traitorous Gangster
Bartholomew Argus, also known as The Badboy, is the twenty-fourth elusive target in HITMAN (2016). He later reappeared in HITMAN 2 (2018) as a Legacy Elusive Target.

Bartholomew Argus was a musician turned actor, but was connected to organized crime in London. Six months ago, he was stopped by the London Metropolitian Police in a routine investigation, together with infamous London gangster, Tommy "The Hammer" Stoakes. The police discovered weapons and drugs in the vehicle and took Argus and Stoakes into custody.

Nevertheless, Argus successfully argued, and subsequently testified that he knew nothing of this. Betrayed by his accomplice, Tommy Stoakes was sentenced to ten years in prison.

Actually, according to the client who signed up Argus' assassination contract, the weapons and narcotics belonged to Argus, an infamous gangster poseur, and that he successfully shifted the blame to his childhood friend Tommy Stoakes to avoid a prison sentence.

Before the assassination took place, Argus was filming a cameo role in Dino Bosco's film, The Icon, before he was tracked down and assassinated by Agent 47. 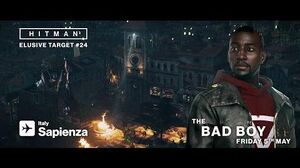 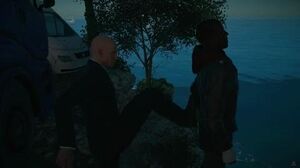 Retrieved from "https://villains.fandom.com/wiki/Bartholomew_Argus?oldid=3960831"
Community content is available under CC-BY-SA unless otherwise noted.