Prevent the Assassins and the Templars from finding the Observatory (failed).

Bartholomew "Black Bart" Roberts, born John Roberts, was a Welsh pirate, a Sage, who raided ships in the Caribbean and on the West African coast between 1719 and 1722, and one of the two main antagonists (along with Laureano de Torres y Ayala) of Assassin's Creed IV: Black Flag, and a mentioned character in Assassin's Creed: Syndicate.

He was voiced by Oliver Milburn who also voiced John Standish in the same game.

John Roberts was born on May 17th, 1682 in Castell Newydd Bach, Wales, Kingdom of England to unnamed parents. Roberts was the reincarnation of Aita, the Isu scientist who created the First Civilization site, the Observatory. During his conversation with Edward Kenway in the Observatory, Roberts appeared to know that he was a reincarnation of Aita. He would later go by the name Bartholomew, and presumably became a sailor by his teens.

The Templar Order located Roberts and took him to Havana. The Assassins Mentor, Ah Tabai sent his finest student, Duncan Walpole who secretly planned to defect to the templars, to free Roberts and bring him to the Assassin city of Tulum. Unbeknownst to both sides Walpole was murdered by the pirate Edward Kenway who then decided to take his place in so he could get the money the templars had promised Walpole.

In Havanna Roberts was brought before the Templar Grand Master Laureano de Torres y Ayala. Torres escorted Roberts to the prison of Havanna alongside Kenway his bodyguard El Tiburón and his Templar accomplices Julien du Casse and Woodes Rogers. However the templars were attacked by the assassins and one of them freed Roberts only to be killed by him his own hidden blade, Roberts then attempted to escape but Kenway caught up to him and brought him back to Torres.

Roberts was then brought back to Torres manor but he still managed to escape after killing all the soldiers that were guarding him. Later the slaver and templar ally Laurens Prins claimed that he had captured Roberts and tried to sell him to however after a failed meeting with Torres Kenway who had now allied himself with the assassin broke into broke into Prins' estate together with the assassin Mary Read. While Kenway assassinated Prins in his garden, Read searched the place for Roberts but was captured by him and held by gunpoint. As Roberts declared that he actually worked for Prins Kenway informed him of Prins' attempt to sell him he replied that he really couldn't trust anyone shot an alarm bell and used this distraction to escape.

Kenway later found Roberts hiding in the African jungle in 1719, and struck a deal with the Sage to free his imprisoned crew in exchange for Roberts leading him to the First Civilization site known as the Observatory. Kenway killed the Templars in Príncipe, freed the crew, and recaptured the Princess. Roberts gave a speech to his crew declaring his intentions to sail as a pirate, and the two captains returned to the West Indies. A few months later after he had made a name for himself and become a successful pirate, Roberts needed Kenway again and convinced him to help him steal crystal vials from a Portuguese camp that contained the blood of many templars and pirates. After obtaining the vials the pirates escaped in the Portuguese flagship that Roberts claimed and made into his own flagship afterwards.

Roberts then realized they were being followed by the pirate hunter and former friend of Edward Benjamin Hornigold and told Kenway to kill him. After a sea battle, Hornigold's ship crashed onto an Island where Kenway assassinated him. Afterwards the two met again in Jamaica at the beach of Long Bay where Kenway and Roberts searched the island together with four of Roberts men. They made their way through the jungle with Kenway knocking out the guardians that were protecting it, despite Roberts' advice to kill them. As they reached the observatory Roberts killed his four men claiming to Kenway that they would have gone insane and told him to carry the vials for him.

While they were making their way deeper through the observatory Roberts told Kenway about his life as a sage and his pirate creed and mentioned his previous visits to the observatory in his other lives. They then reached the antechamber of the observatory where he showed the function of the observatory to Kenway by inserting the vials into a crystal skull in the centerpiece of a golden armillary sphere which enabled them to see and ear through the owners of the vials. After showing Kenway the current actions of Jack Rackham and Woodes Rogers, Roberts removed the skull, rendering the observatory inoperable. Kenway then proposed using the observatory to make a fortune, but Roberts betrayed him and knocked him down into the water below, taunted him that their partner ship was done and left. Kenway managed to get out of the observatory and reached Roberts on the beach, but succumbed to his injuries as his ship the Jackdaw sailed away. Roberts mocked Kenway about the mutiny of his crew and then decided to collect the bounty on his head and turn him over to the British government.

He then went on to capture hundreds of ships in the following two years making himself a name as one of the most successful pirates of all time. However eventually, Kenway who had survived and become an assassin at this point found him at his hideout in Principe. Recognizing Kenway, Roberts jumped onto his ship and attempted to flee, which was thwarted when Spanish and British ships attacked. In the pursuing battle Kenway boarded his ship and fought and killed Roberts. With his dying words, Roberts lamented being born to early like many before him and asked Kenway destroy his body so it wouldn't fall into the templars arms. Kenway agreed with Roberts' last request, and threw his body overboard. Roberts would later be reincarnated with John Standish, who would attempt to resurrect Juno via the body of a Abstergo Entertainment employee. 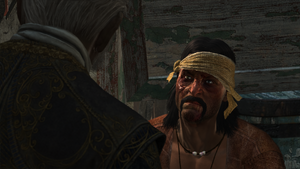 The Sage in Havana, having been captured by the Templars. 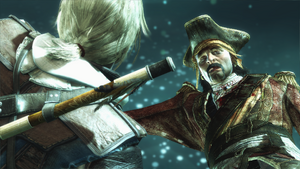 Roberts in his final moments, speaking to Kenway.