The Ninth Colossus, nicknamed Basaran, is a major antagonist from the video game Shadow of the Colossus. It is the ninth boss encountered in the game and a vessel for the essence of Dormin.

Basaran and the other fifteen Colossi were created by Lord Emon to contain the fragmented essence of the defeated evil Dormin. He set them all to wander the Forbidden Lands, destroying anyone that comes their way, so that Dormin could never be resurrected.

Basaran is the ninth colossus that he encounters, waiting in a large cave next to a dark and smoky wasteland of geysers. It will be awakened by Wander approaching, and will immediately begin chasing him and his horse Agro and shooting deadly energy projectiles at them. Wander must lure Basaran out of its cave and over the geysers dotted across the wasteland. If Basaran is over a geyser when it erupts, it will be knocked off-balance and begin to teeter. Wander must then quickly shoot its two still-planted feet to cause it to completely lose its balance and fall, rolling over onto its side. Wander must then scale the colossus' exposed underside and shell to reach its back before it turns itself upright, making his way onto its back. He must then run to Basaran's head and find its sigil and stab it. After the sigil is stabbed enough, Basaran will collapse and die, releasing the fragmented essence of Dormin contained within its body.

Basaran's corpse can be seen as the credits roll. 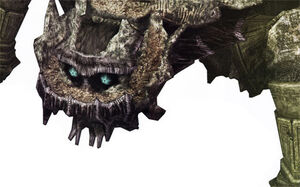 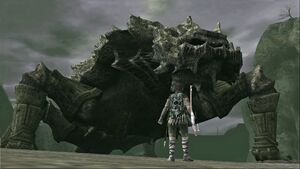 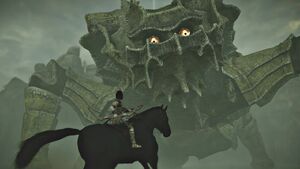 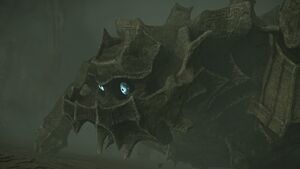 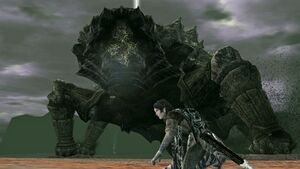 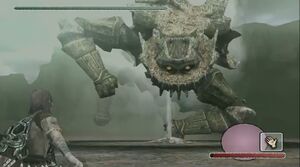 Basaran tipped by a geyser. 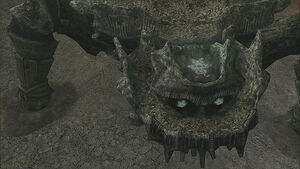 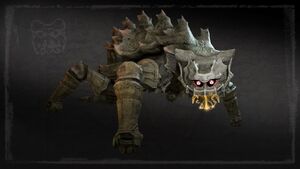 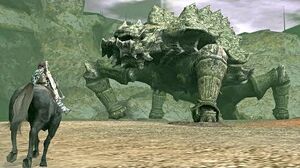