Become allied with Andy and be fed.

The Basement Demon is the unnamed antagonist of The Tale of the Dark Music, from the children's horror series Are You Afraid of the Dark? Although lacking an official name the entity was heavily implied to be a demonic force (perhaps even the Devil itself) and resided within a small room inside the basement of an old house formerly inhabited by Andy's rich uncle.

Andy (the child protagonist) moves into the house following his uncle's death and encounters the Basement Demon - which is summoned every time he plays music and takes a unique and frightening appearance each time it manifests: becoming a shadowy creature with glowing red eyes, a human-sized doll and a skeletal carnival barker as well as a field of light ranging from blue to red.

Although originally terrified of the monster Andy eventually decides to use the Basement Demon to exact revenge on Koda, an older bully who continually beat him up - however Andy's revenge goes too far and Koda is sucked into the Basement Demon's dimension and is probably devoured by it, although his fate is unknown.

When Andy come down to his basement he finds a new bike (his previous one having been wrecked by Koda) and the Basement Demon informs him it will grant his every desire if he feeds it, just like it did with Andy's uncle. The story ends with Andy grinning as he hears his annoying little sister calling him while his new "ally" laughs evilly. 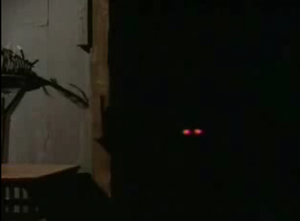 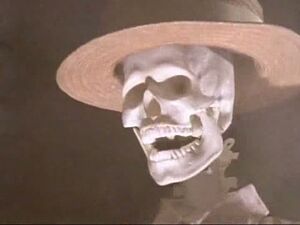 The Demon as a skeletal carnival barker. 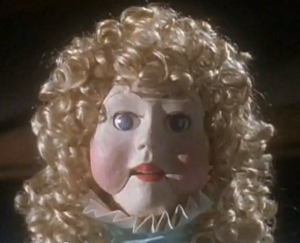 The Demon as a doll.
Add a photo to this gallery
Retrieved from "https://villains.fandom.com/wiki/Basement_Demon?oldid=3832223"
Community content is available under CC-BY-SA unless otherwise noted.